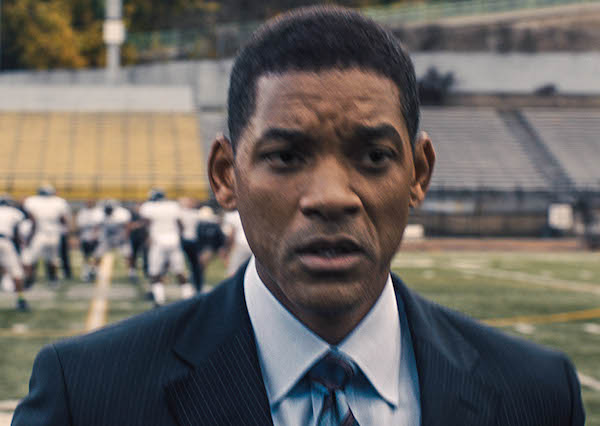 Concussion is bit heavy handed in the beginning and preachy in the end, but there’s a solid middle section that truly inspires the outrage it should. This is the story of a corporation putting money before human lives, but the consumers were somewhat complicity too in enabling the corporation to continue looking the other way.

We are introduced to Dr. Bennet Omalu (Will Smith) giving testimony where he lists all of his credentials to the audience, I mean to the court. Shortly after, his boss Dr. Cyril Wecht (Albert Brooks) tells Omalu what his problem is. Even the eccentricities Omalu reveals himself are on the nose. Omalu doesn’t watch TV but he owns one because it’s American, and the film keeps emphasizing that he doesn’t watch football, because that’s ironic.

You’d think that discovering a deadly condition would lead players to quit for their own well being and fans to boycott in solidarity, if you were from a different planet. On Earth, the economy of Pittsburgh and other cities depend on their athletic teams and neither the city nor the NFL are going to give that up for a portion of the afflicted players. Realistically, most players would probably risk it for the millions of dollars in contracts and endorsements anyway. Fans are sort of looking the other way too. The film doesn’t indict the fans for supporting the NFL. That’s my extrapolation, but it doesn’t take a neuropathologist to know that getting slammed in the head is bad for you.

The film is not soft on the NFL at all. The way NFL doctors themselves put money above  people speaks for itself. The manipulative measures they took to discredit Omalu, contesting common sense science just to avoid the possibility of reform, is infuriating but to be expected from people protecting their investments.

The medical side of the story is just as tragic. In order to get enough evidence to even present his theory, Omalu had to wait for more dead football players. He could only test his theory in an autopsy. Once there were enough case studies, it becomes a matter of justice for those families as well as preventing any more deaths.

Some aspects of the presentation overstep a bit. Even if it’s a direct quote, having Omalu say, “God did not intend us to play football” is a bit much. It’s enough for him to explain how birds like woodpeckers have natural protection for their heads that humans do not have. He doesn’t need to bring religion into it. When he says that football killed Webster, the film does call him on that hyperbole. There are less incendiary ways to describe the tragedy and that is part of Omalu’s journey as he realizes that, for some reason, people aren’t thanking him for warning that their favorite sport and livelihood is deadly.

Omalu faces resistance in the Coroner’s office too. Mike O’Malley plays Daniel Sullivan, a colleague who doesn’t like Omalu’s eccentric techniques of talking to the dead bodies out loud, and he really doesn’t like Omalu cutting up Mike Webster. O’Malley can play he hell out of a working class guy who doesn’t want his world rocked. He did it so well on Glee as a father who didn’t understand being gay but wanted to love his gay son anyway. I suspect it’s because O’Malley understands and has compassion for people that others might oversimplify. Sullivan is still a coroner though. He’d rather not find out there might’ve been a medical condition that claimed his football hero’s life?

After a few more cases, Sullivan cracks to Omalu, “I guess these guys only die when you’re working.” Um, isn’t that just the narrative convenience of the film adaptation? Maybe in real life it also happened that every Steeler died on Omalu’s shift, but certainly by the time he’d begun his study, it wouldn’t be unreasonable to call him in every time a relevant case occurred. Sullivan seems designed simply to be the A-hole character opposing Omalu, which is unnecessary because there was a very real opposition in the NFL itself. Still, O’Malley’s great though.

There are some other aspects of Omalu’s personal life that I wonder how conveniently they fit into the narrative as portrayed in the film too. Even if they corresponded exactly as portrayed, they may have been extraneous to the story. In central moments, Concussion hits on the fundamental human question of how do we take care of people from whom we profit. It loses focus along the way, but it is still a vital story.