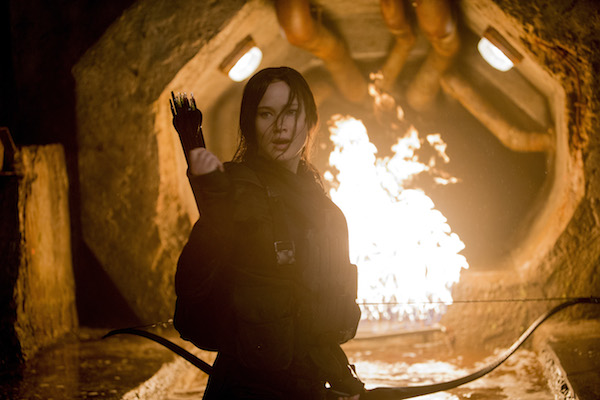 but if you can overlook that, there’s a lot to enjoy in Mockingjay Part 2.

For movies about battles to the death, none of the Hunger Games films are all that exciting. You could say that in the first two, you’re not supposed to enjoy watching people forced to murder each other, but by now we are watching characters we presumably love fight for their lives and try to save their world, and it’s still badly paced. 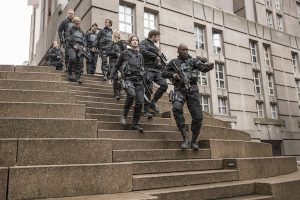 There’s a bit of the Lord of the Rings model where the squad walks and walks and walks and walks (incidentally, Mockingjay also has more endings than Return of the King). Each pod they run into is a different booby trap. Most of them are a CGI event happening independent of the actors, but there’s an underground fight that’s more engaged. 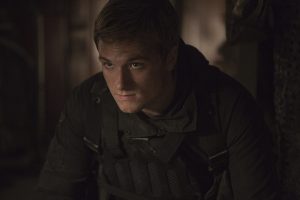 In between every skirmish, they pause to talk or watch videos. Even if they’ve got to fill an equal quota of political strategy, it’s not half as sophisticated as Ender’s Game. At least it does attempt to confront the Katniss mystique and call out the duplicitous double cross cliche. When Gale and Peeta talk about Katniss, it’s at least more enlightened than Edward and Jacob. 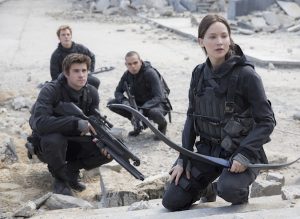 While I find the overthrow of a dystopian government a lot less interesting than the world they were overthrowing in the first place, I’ll give Suzanne Collins some credit. Her story has the balls to show the true hell of war. My biggest beef with the series has been that Katniss never had to kill anyone the audience liked, and she’s still not the instrument, but this one doesn’t spare her the moral ambiguity.

What it has to say doesn’t take three, let alone four stories. It’s really only two, and this has been a three part sequel the whole time, with Catching Fire ending in a cliffhanger. Collins knew that. She only stretched it across two additional books, but the films found a way to inch along even more deliberately. It’s got a good ending though. 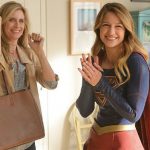 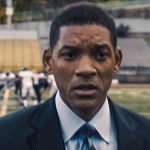