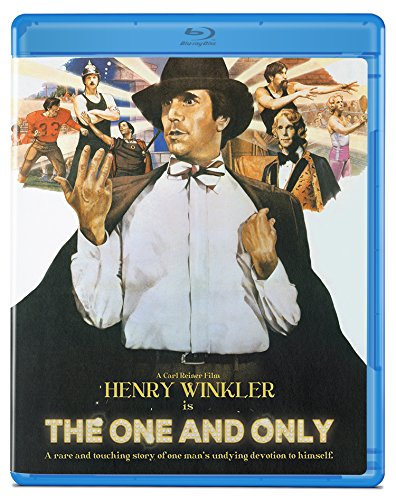 When this 1978 comedy came out on Blu-ray, I watched it for the first time. I had heard it referenced occasionally in my childhood, and now 30 years too late I discovered it’s a hugely underrated comedy.

Henry Winkler plays an ambitious young acting student in college who has unflappable self-belief even when he goes to New York and can’t get work. The only regular gig he finds is as a wrestler, playing the heel.

This is a bravura performance by Winkler. He is a magnificent ham, in and out of the wring, but the film allows moments of sincerity but still qualified by narcissism. Ultimately it lets him get real. The script by Steve Gordon is all rapid fire vaudevillian one-liners or banter.

The One and Only is really ahead of its time in its portrayal of celebrity culture and narcissism. Looks like that was always around, even before Twitter and reality TV. This is Carl Reiner directing in between Oh God! and The Jerk with Winkler at the height of Happy Days.

The Blu-ray by Olive Films looks great. You see the film grain, some digital noise if the brightness is too high, but a really consistent transfer if you leave it in standard mode. The colors look like films of the ‘70s but it’s a ‘50s period piece. Enjoy seeing New York City back then.

You see all the detail too, the dingy locker rooms in the wrestling arena and the sweat of hard working fighters. When there’s a montage of wrestling success, there’s still some authentic film dirt. Winkler’s flamboyant costumes are a colorful sight on Blu-ray too.

So I hope the new Blu-ray gives people a chance to look back on The One and Only. It still holds up as a hilarious comedy, and makes me wish Winkler had more comedy vehicles tailored to his talents.