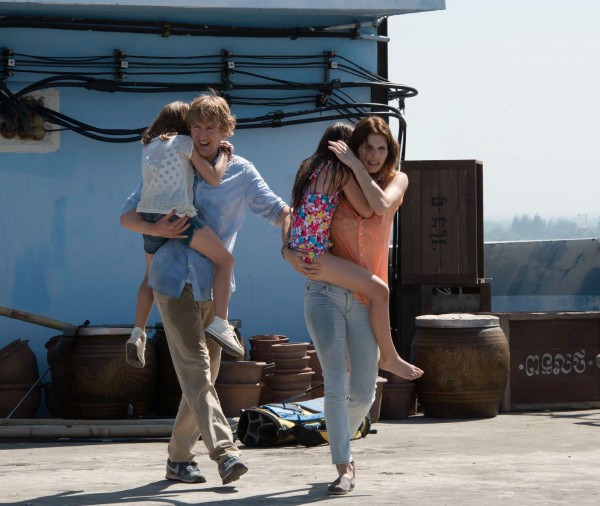 If you saw Lake Bell go primal in the gritty indie thriller Black Rock, that was nothing compared to No Escape. No Escape has her jumping across rooftops, dodging helicopters and running through the streets of Thailand. The film stars Bell and Owen Wilson as a couple who’ve just moved to a foreign country when a coup breaks out. They are on the run with their daughters in tow.

I got to speak with Bell about No Escape and learn all about the injury she suffered early in the shoot, working on some of the film’s most tense scenes, and the relationship between her and Wilson’s characters. Plus a sneak peak at her upcoming rom-com with Simon Pegg, Man Up. No Escape is now on DVD, Blu-ray and digital.

Nerd Report: Not that this is an action romp, but was action heroine something you were always interested in exploring?

Lake Bell: 1000%. I think as an actor, just being in this crazy industry, what you crave and what you aspire to is variance and diversity in the types of things that you do. It’s not just about doing the same thing over and over again. This project was tremendously appealing for that reason. God, I’ve never been in a position to do something like this. Yeah, I embraced the physicality of it. I actually threw my back out the first week of shooting which provided its own obstacles and challenges. The way that the Dowdles wanted to shoot it too, they were adamant that you see the protagonist doing all of these things versus all of a sudden they mysteriously turn around and a stunt double takes over. While we did have stunt doubles, we had to do it once ourselves every time.

Nerd Report: So you hadn’t been offered the buddy cops or secret agent roles?

Lake Bell: No, but hopefully after this movie, maybe the door will come knocking for those kinds of opportunities. I definitely went in pretty hard and so did Owen obviously. I mean, Pierce has been around the block when it comes to kicking ass, but Owen and I definitely got our money’s worth for cardio. 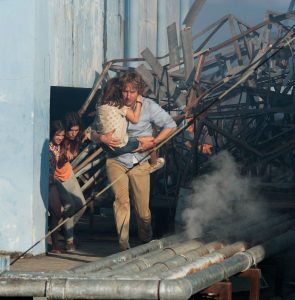 Nerd Report: You can tell. In what scene did you throw your back out?

Lake Bell: I threw my back out on the roof scene. We were running from some massive pyrotechnics and I was carrying Sterling, who is a very beautiful, leggy, larger little girl than at that time I was used to carrying. I was running with her in my arms and I jumped over some pipes and thrusted underneath a low hanging protection area. When I went down, I think it was the levels, it was so much weight in the front that I just thought, “Oh God.” I was in the take and I thought, “Sh*t.” I knew right away.

Nerd Report: It seems like Annie and Jack have a really good relationship when this starts. They have enough communication for her to know to say, “I can’t comfort you right now.” That doesn’t mean “I hate you, go away.” Did you work on that or was it in the script?

Lake Bell: No, I think the Dowdles really were keen to infuse very real but loving tension within these two people that the relationship between Jack and Annie feels like a real marriage that is not perfect, but also not combusting at every turn. When you’ve been together with someone for a long time, there are times where you have to admit that you need a moment. I thought it was a really beautiful scripted moment between a married couple that rang true for me.

Nerd Report: I think it’s aspirational because I don’t know many couples who have the presence of mind to avoid a fight like that.

Lake Bell: I guess everybody deals with it differently, right? I’m personally not particularly confrontational so I do avoid a fight at all costs, so I related to that.

Nerd Report: Or even to recognize your own needs in that moment.

Lake Bell: I felt like it’s very realistic to say, “Hey, I’m not here to comfort you.” I like that you [noticed]. I think they’re in a pretty good place despite that there are some real couple conflicts.

Nerd Report: When the coup begins and you’re waiting in the hotel room, are they playing the sounds for you outside?

Lake Bell: Yes, we had some sounds and I think a lot of it was John’s wife, who’s an actress as well, on the other side of the door playing out the scene and the screams of another tourist being assaulted. So I could hear that through the door and that was helpful in my performance.

Lake Bell: Yeah, and I don’t know who else was there but I know that John’s wife was there and she did a tremendous job of fully playing out that scene of horror on the other side.

Nerd Report: Every scene is so tense, did you basically have to cry every day? I don’t remember a scene that didn’t call for it.

Lake Bell: I know, it’s so interesting. Yes, I think part of the largest challenge of this movie was maintaining the authenticity of the stakes and to also build on them. When you just thought it wouldn’t get worse, it does. So how to maintain that kind of level 10 and then level 11 and level 12, levels that you didn’t even realize were going to occur. So that kind of endurance was a challenge.

Nerd Report: After No Escape, was it a relief to go back to Childrens Hospital and make monkey noises?

Lake Bell: Yeah, big time. Of course. Right after this movie I ended up going to London and doing Man Up with Simon Pegg which is a total two hander comedy. So that was a welcome respite to crying every day.

Nerd Report: What do you get to play in Man Up?

Lake Bell: In Man Up I play a British woman. Her name’s Nancy and she’s a bit stuck in arrested development in her relationship foibles, who basically steals someone else’s blind date at their meeting point. She sort of falls into it and decides to go with it, as just a poor decision but hilarity ensues. It was going very well, and eventually he finds out that she’s actually a crazy person.

Nerd Report: Did you do a British accent for Man Up?

Lake Bell: Yeah, but I’m also cheating a little bit. I went to drama school in England for four years of my life, so I have an alter ego that is from a different land. But I’m also an accent aficionado. With In a World… you can see that I’m pretty obsessed.

Nerd Report: I trust that you could do it even if you hadn’t had schooling in England.

Lake Bell: Perhaps. With the right training, I respect dialects very much in that I feel whilst I have an ear for it, I also am respectful that it takes me a moment to architecturally get my mouth in the game and to get all the musculature to form into authentically taking on another dialect. While I was in Thailand, I did Skype sessions with my dialect coach at night for a month before I even hit London to start that other movie.