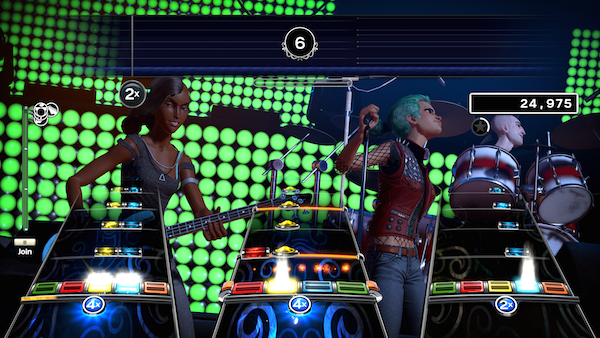 I was sad when Rock Band stopped releasing new DLC for Rock Band 3 because I would have kept playing new songs. I’m of the “if it ain’t broke” mentality, so I was just happy to see any Rock Band game come back. Now it’s the only game in town for five button guitars, if you want to play along with music the way you’re used to.

The most marked new feature in Rock Band 4 is the freestyle guitar solo, and the tutorial does a good job teaching you how to play. It still sounds like a preset solo to me, no matter what notes you hold, but what I like about it is that it keeps you in rhythm, rather than anarchically tapping buttons and strumming. I’d also note that on most songs, the solo never takes you too far away from where your fingers need to be when the song resumes.

I was never much into drums on Rock Band but I do appreciate that the new drum fills simply because they give you actual beats to hit. When drum solos allowed you to bang away, I must confess I created quite a racket. I couldn’t get much sense of the new vocal improv feature. Since I’m using old instruments, it may not be available to me.

In career mode, Rock Band 4 solved a major organizational issue. Now that I have hundreds of songs, just choosing a set list could be unwieldy. Imagine players with thousands. So the ability to vote for songs narrows down the library to a multiple choice of four. The categories add a fun mystery too, as you might select a randomized song from a given year, genre or artist. Sometimes you’ll even get to revote if the audience makes requests, and the requests could be better than the original options.

Going on tour gives you choices of how you’re going to progress too. I’m always going to choose the path of song flexibility over gear and rewards. I’m not looking at the animated characters anyway, and I didn’t spend much time on my avatar. I’m about the music so I want the most freedom to pick my music possible.

Since I’m using my old instruments from Rock Band 1 and 2, I still find the guitar a tad unresponsive. I suspect the brand new “band-in-a-box” kit solved that issue, but I don’t have the cash to upgrade. My suspicion is validated by trying out Guitar Hero instruments, which are now compatible. The responsiveness was right back in my comfort zone, but it had new problems. The old Guitar Hero III guitar would lose one of out of the five color buttons randomly. I’m not sure if that’s the age of the equipment or a compatibility issue. And my Guitar Hero World Tour guitar no longer works. The dongle doesn’t even light up.

Compatibility for Rock Band 4 has been extensively covered, so I’ll try to stick to new information.  Since the PS4 now only has two controller slots, that takes up the two guitar dongles and leaves none for the wired mic and drums. Luckily, I could plug the wired mic and drums into one of the guitar dongles, which fortunately had extra slots. It was messy, but it worked and I had four people playing simultaneously.

I went online and re-downloaded all of my old songs. It was cool that Playstation Store remembers which ones I’ve already purchased, because I sure don’t. I could have sworn I owned a few titles that it said I didn’t, and that might still be Rock Band 4 catching up with my old account. I also pour one out for the songs that are no longer available due to rights lapsing. 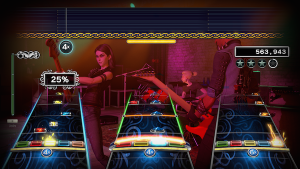 Like many party games, Rock Band 4 is going to be an ongoing project for me. I will continue to buy new songs, especially now that they’ve got the DLC back on track. I also intend to get to the bottom of these compatibility issues. Look for more reviews of Rock Band content here on Nerd Report, and look for my band, Franchise Fred & the Sequels (no spaces though) for online multiplayer!