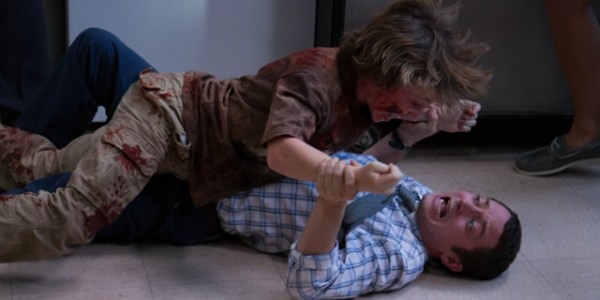 Horror comedy has always been a fun conundrum for cinema. How can you be scared if you’re laughing, and how can you laugh when horrific violence is happening? Films like Evil Dead II, Shaun of the Dead, and An American Werewolf in London show how it can be done. Of course humor is disarming and violence is a macabre joke, in the right hands.

Cooties is pretty much a full on comedy, to me at least. I don’t want to take away from anyone who could be frightened by the siege of infected monsters, but even the context into which the subgenre is put is funny to me. See, Cooties is all about cathartically murdering children and that is hilarious to me.

A batch of tainted chicken nuggets turns the kids in school into raging monsters attacking the teachers. Of course, it only affects people who haven’t gone through puberty, giving it similar properties to the fictional cooties. Aspiring author Clint (Elijah Wood) picked the wrong day to pick up some substitute teaching work. He and the teaching staff band together to barricade themselves from the kids, but have compunction about impaling a pre-teen if it’s us or them. 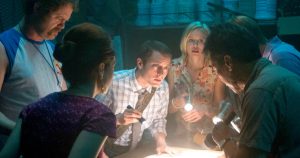 Like any zombie or survival horror movie, Cooties is really about the disparate group of teachers and their internal conflicts. Lucy (Alison Pill) is cheery and oblivious to Clint’s crush on her. Lucy’s boyfriend Wade (Rainn Wilson) is the alpha male, aggressive gym teacher. Doug (Leigh Whannell) is the weirdo scientist, who at least claims to understand the outbreak. We have no way of verifying his information but I suspect he’s not Jeff Goldblum. Tracy (Jack McBrayer) is the panicky whiner and Rebekkah (Nasim Pedrard) is the bitch.

Again, just the fact that the monsters are children skewers the trope with blazing satire. Nothing is held back in deference to the precious children. In fact, Cooties seems to revel in treating the kids like little bastards who deserve to be bashed in the head, as well it should. They are portrayed as the worst of undisciplined youth to begin with, but just in principle, if you’re making an all out gore movie, don’t hold back. The fact that it’s children adds at least 10% to violent jokes that would be funny on their sheer violence alone. 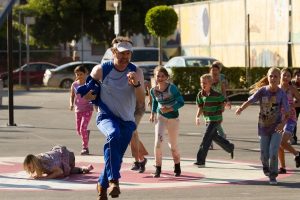 The script is full of wit too. Between Leigh Whannell and Ian Brennan, the script is full of asides that are clever independent of the horror show occurring in the background. Comments on the situation offer every perspective represented by the personality types of the teachers. That means Wilson gets some of the best lines, but Whannell’s are the most absurd.

Cooties has a number of great bloody set pieces and plenty of character banter in between and during. As a fan of the survival/siege horror genre, Cooties is a great one but what really stands out are the random and absurd jokes layered throughout. I always love a recurring joke and Cooties has several that play through to the bitter end.

Cooties looks great on Blu-ray because it is such a colorful film, playing up the humor of a happy elementary school with bright colors when something so horrible happens. But even when the film gets dark the picture holds up with the characters crawling through vents and running through the darkened halls.

The deleted/alternate scenes have some jokes that are almost as funny as the movie. They definitely put the funniest stuff in Cooties, but Cooties was so funny you can imagine the things they had to cut out were still pretty funny. The commentary has the whole cast with the directors. While they definitely have banter, they allow each other to actually comment on the film so it’s the best of both a fun group but not so inside they’re just talking amongst themselves. There’s even a video of the commentary session, and a behind the scenes feature that covers the basics in 13 minutes.