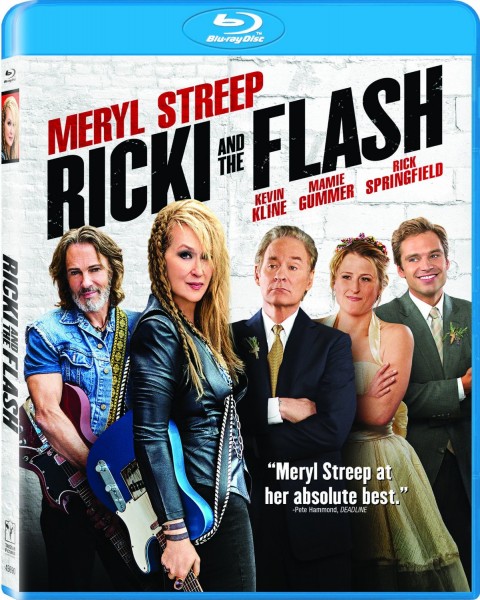 I had moderate hopes for Ricki and the Flash. Diablo Cody script, Jonathan Demme directing, great cast and music. Even if it’s not best picture material it could be fun. However even those modest expectations were let down when I finally saw it. This movie is a mess and will be on my Worst of 2015 list.

There’s not one character whom I care what happens to them, but the movie is so in your face about every cliched drama, you can’t escape it. It’s the disgraced mom (Meryl Streep), the entitled kids (Mamie Gummer, Sebastian Stan, Nick Westrate), the doormat ex-husband (Kevin Kline), the unrequited band mate although Rick Springfield is sympathetic in that role.

The film is full of a lot of scenes that they want to have happen but didn’t think of reasons for them to. They want to have a dinner table confrontation where the entire restaurant goes silent and stares, but by the time they do there had been more shocking outbursts earlier in the conversation. Gummer’s character describing something as “beyond gay” feels outdated and insensitive. Getting divorced wouldn’t make her homophobic. The kids would be more sympathetic if they’d become good people despite Ricki’s bad parenting. Ricki is right wing, probably because it seemed funny to have a rock n’ roller be pro-Bush and anti-Obama. Perhaps it speaks to she has big ideas that she sticks to but clearly invested all her being in the superficial, but the film doesn’t read that much into this political affectation, so why should I?

The movie climaxes at a wedding where whimsical scenes introduce brand new characters, yet the ones we already know behave in unmotivated ways. That wedding scene took days, maybe even weeks, to film with maybe 100 extras, so a lot of coordination went into it, but no one thought about character motivations? Why are people against Ricki performing? I know she’s not well liked but why are people scowling? And if this is so offensive, why then do bridesmaids and groomsmen put on a dance show? Because dancing is a spectacle and they want to show everyone having fun, at the expense of the audience.

Ricki and the Flash is a cover band fronted by Streep’s character, and the soundtrack featuring all their performances could go platinum. Meryl does Jagger, Petty, Gaga, P!nk and more! By the time they perform an entire unedited song an hour into the movie, I suppose it’s the lesser of two evils. By then it’s not like we were itching to spend more time on the plot.

On Blu-ray, the seedy bar The Flash plays in looks good, sharp and well lit if not colorful and detailed. The locations of the film aren’t much for scenery. There’s a Whole Foods knockoff, a mansion in Indianapolis and the wedding hall, and it all looks clear if not particularly bright.

Occasionally the handheld cinematography of the performances gets irritating. The jittering is jarring enough to give you a headache, and it’s far from Paul Greengrass aggressive shaking. It’s just at a point where why not just lock it off on a tripod or use a dolly?

The 10 minute behind the scenes feature is basically a pep talk. Yes, the music was performed live on camera. Demme extolls the virtue of a character-driven script, but forgot about the motivations that make character dramas work. Deleted scenes include a whole song and a mildly funny scene of Ricki at airport security, if jokes about not knowing TSA protocols of the last 15 years are funny. Springfield gets a five minute spotlight too.