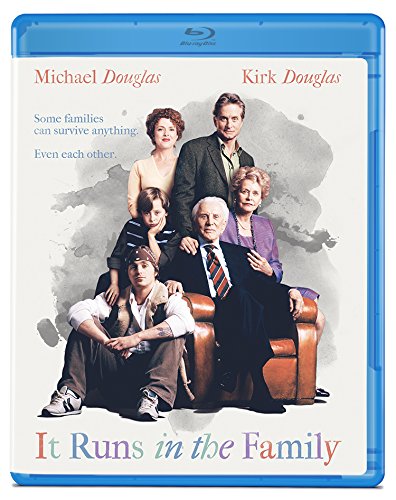 For the first time on Blu-ray from Olive Films

It Runs in the Family may not have gotten great reviews or been a big hit, but it provides a few areas of interest. It is a capsule of the Douglas family at a specific time, one of Kirk Douglas’s last and one of Cameron Douglas’s only, an early role for Michelle Monaghan, and I covered the press junket. So when I saw it was finally coming to Blu-ray I thought it was worth a revisit.

The Blu-ray looks good. Widescreen shots of New York City are beautiful, and Kirk Douglas looks great showing the weathered dignity of a then 87-year-old embracing his present self. You can see the film grain, but now that every movie we see is digital, that just makes me nostalgic for the time when a regular drama was shot on film, not just the prestige project of an auteur.

Colors stay bright throughout the film, even at night, even in a college dorm room or child’s bedroom. To be fair, those were probably better lit sets than the real locations. Bonus features from the 2003 DVD are still included so you can listen to director Fred Schepisi’s commentary, or watch the behind the scenes and deleted scenes for more background.