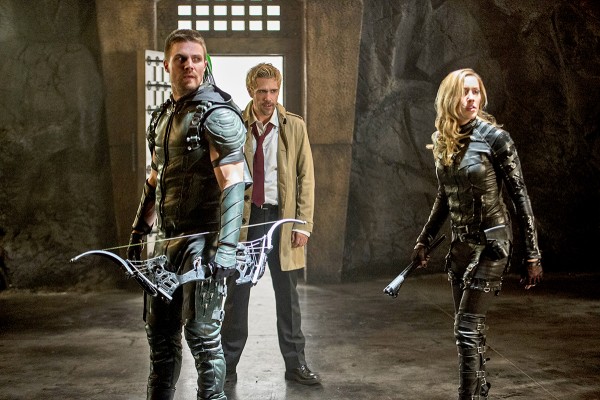 This is part two of the two-part-crossover with The Flash, and it’s not as awesome as part one. With everything going on, was this really the right time to deal with Oliver’s paternity issues? I think not. It really slowed down the momentum that part one set up. And it totally trivialized the danger they were supposed to be in. Then Barry time traveled, giving the team a second shot at Vandal Savage, since they blew their first shot and got all killed and everything. But by using this maneuver we saw things happen twice, giving us less time for new material.

On the cool side, we get a flashback to ancient Egypt. That’s where a very jealous Vandal Savage first kills Kendra and Carter. Or should I say, priestess Chay-ara and Khuf? Then a meteor hits, which is always a bummer. But it’s the catalyst for their whole lives long journey. Then Kendra snaps back to reality. It was a memory that Kendra had. Though she lies to Carter, saying she doesn’t remember a thing. Why? Cause she’s scared I guess. But there’s a lot of lying going on in this episode.

The arrow gang meets up with the Flash gang in Central City. They stay at a farmhouse instead of Star Labs, for some obscure reason. Then Malcolm Merlin arranges a meeting with Vandal Savage. Green Arrow and Flash attend, but aren’t ready to give up the Hawk-people just yet. So Savage gives them 24 hours to deliver them to be killed, or Central City and then Star City will be destroyed. Now this is where it gets all soap opera-ish.

Oliver lies to Felicity about the whole paternity thing. He suspects that he has a son, and conveniently secures a hair from the kid, even though his Mom swears he’s not the Dad. She’s lying of course. Oliver has Barry do a DNA test on the hair, and he gets the results back in a Flash. Oliver is the Dad. He asks Barry not to tell anyone about the test, but Felicity and Barry are friends.  So when he lies to her, she sees right through him. When confronted, Barry gives Felicity the test. And Felicity knows Oliver’s DNA like she knows the back of her hand. So now Felicity knows the truth.   She confronts Oliver, and he lies, which really pisses Felicity off. And she breaks up with Oliver for lying, not because he has a kid. That’s a lot of lying, and it’s all going on while lives are in danger and a killer is on the loose.

The combined team comes up with a pretty lame plan to save the day. Green Arrow and Flash are going to pretend to turn the Hawk-people over, and then grab the staff of Horus and vanquish Savage with it. What could possibly go wrong? Well, because of the paternal drama and the break-up, Oliver’s head isn’t in the game. Even though so much is at stake. And when Kendra is supposed to sprout her wings and join the fray, she can’t even produce a feather. The plan fails and Vandal uses the power of the staff to kill everybody, and I do mean everybody. The Hawk-people get stabbed first, then he melts Green Arrow. And then he sends out an energy pulse that fries both team Arrow and team Flash, and most of Central City. LUCKILY, The Flash runs so fast avoiding the pulse, it pops him back in time. Giving everyone a do-over.

This time around, Kendra learns how to trigger her transformation, thanks to Cisco. And thanks to research, and the Flash, they secure a piece of the Meteor that started this whole thing. Then Cisco and Caitlin extract some ‘Nth’ metal from the chunk, to use on gloves that can hold onto the staff on Horus. (Nth metal is a call back to the comics. It was used to negate gravity in an alternate Hawkman/Hawkgirl origin story) Apparently, when the meteor initially hit, some of the Nth metal merged with the staff, which also has a hawk carved into it.  I’m guessing that the meteor probably merged with Chay-ara and Khuf too.  And that, combined with the staff’s power, caused them to reincarnate, and have bird-like abilities.  They never explain why they get wings, so this is the theory I’m going with until proved wrong.

Barry, who remembers everything that happened in the other timeline, tells Oliver about his kid, without doing the DNA thing. So there is nothing for Felicity to discover. Though Barry advices Oliver to just come clean. Oliver is a hard-head, and rejects this sage advice.  He still lies to Felicity, keeping his new Daddy status on the down low. But now she doesn’t break up with him. So Oliver’s all good for the fight.

This time around, when they confront Savage, everything clicks. Oliver is on point, Kendra’s wigs pop out as planned, and they are able to use the gloves to snatch the staff and vaporize Savage.  He is literally is vaporized, becoming a pile of dust, which they don’t clean up. And that is going to come back to bite them in the behind. (But probably not until the premier of ‘DC Legends Of Tomorrow’, in January.)  Malcolm Merlin comes in after everything’s done, and mysteriously collects some of the dust. Stay tuned.

Kendra and Carter go off to fight crime in another city. And though Cisco’s been dumped, he gives Kendra an emblem made out of the Nth metal, which also has a tracking device in it. In case he needs to find her again some day. And Oliver sneaks off to go play with his kid, leaving Felicity wondering what he’s keeping from her. So their relationship is now clearly in trouble.

In my opinion, this half of the two-party felt overstuffed, and didn’t give much time to the other players. Diggle, Thea, and Laurel donned their costumes once, but were pretty unimportant in the big end fight. This two-part story could have been epic, but the Arrow-half fell short this time around. Though, on the bright side, the ratings were good both nights.  Insuring that there will be other chances to shine.