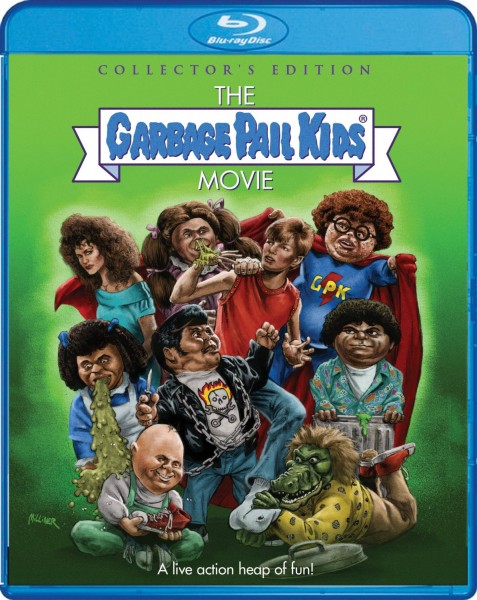 The Garbage Pail Kids is one of those weird ‘80s movies that maybe nobody wanted, but it was made with love. I collected the trading cards that were a spoof of the then popular Cabbage Patch Kids, but maybe they should have made an actual Cabbage Patch Kids live-action movie before going straight to the spoof.

There is a certain joy at seeing a half dozen warped children realized in three dimensions via animatronic costumes, but maybe someone should have thought ahead that you wouldn’t really want to look at them for 90 straight minutes, let alone hear them sing songs in raspy fake child voices. Yet, the movie exists and they saw it through to the end with full bodied practical costumes, if not the most expressive animatronics.

I can’t say the Blu-ray looks that good. Maybe the film was never well preserved, but the always reliable Shout! Factory couldn’t save this one. It’s extra grainy, which is fine since it was shot on film, but within the grain there’s also a layer of digital noise. It’s a dim, dark film as it is, but at least you can see the detailed textures of the Garbage Pail Kids costumes.

The interviews are not as in depth as they usually are on Shout! Blu-rays, which is fine. There’s probably not as much to say about this movie. 10 minutes with the special effects artists covers everything, and 20 each with Mackenzie and the Garbage Pail Kids actors. There seems to be a shared feeling that the film should have been more horrific with the GPKs as villains. That’s an interesting take but I don’t think there was a huge groundswell for that movie either. It might be more practical, that these aren’t characters you want to watch for 90 minutes.

It’ll always have a special place in my heart though, and I’m glad it’s preserved in a top shelf format by Shout! Factory with the talent on record before it’s too late.