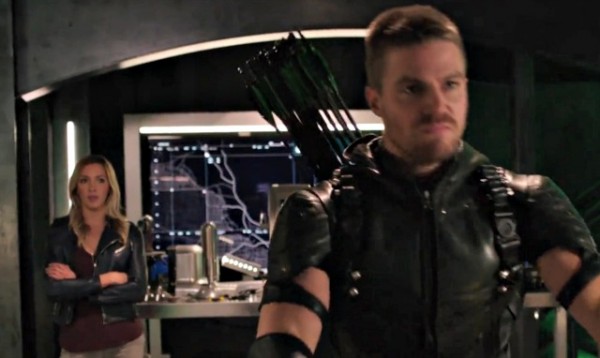 Oliver’s mayoral campaign hits a snag named Damien Darhk. At Oliver’s ‘Save The Bay’ event, an armed drone shows up and fires on the crowd of supporters. Not the positive message he was trying to convey. So, in an attempt to stop the madness, Oliver goes to the press and outs Darhk as the head of HIVE, and the villain trying to destroy Star City. Needless to say, he’s pissed!

Felicity and her Mom find the engagement ring that Oliver hid after he changed his mind about proposing. And they mistakenly think that he’s going to ask her at the Holiday fundraiser. He doesn’t. And at first she’s upset, and wonders what’s changed. But before Oliver can come up with an answer, Felicity is kidnapped by Damien Darhk, as are Diggle and Thea.

Green Arrow goes on a rampage, trying to get Darhk’s minion’s to give up his location. But they don’t. Luckily, Malcolm Merlin retrieves the cellular phone of one of the ghosts, and it’s a direct line to Darhk. So Oliver does the only thing he can do. He surrenders to save his friends. He trades his life for Thea, Diggle and Felicity. Unfortunately Darhk isn’t a man of his word.

Once Darhk’s got his hands on Oliver, he goes ahead with his plan to kill Diggle, Thea and Felicity. It’s all part of the bigger picture. Humanity needs a do-over, and Darhk and his associates intend on pressing that re-set button, which would destroy everything. Luckily, Black Canary and The Green Arrow show up to rescue Oliver and the crew, who are about to be gassed. Malcolm Merlin is in the green arrow gear. And he does a good job fighting Darhk. In fact, he almost kills him. But Darhk knows a few incantations that ultimately save him.

Now that Damien Darhk has been vanquished, for the moment. Oliver goes back on the campaign trail. And at a rally he proposes to Felicity. She says ‘yes’ and they live happily ever after. At least that’s the plan when they drive off. But before the loving couple can get where they’re going, their car is ambushed and riddled with bullets. Oliver gets away, unscathed. But Felicity has been shot, and is bleeding out, close to death. Was it her grave we saw in that flash-forward in the season opener? Stay tuned.

NOTES: Felicity’s Mom and Captain Lance are an affectionate couple. And as for Damien Darhk, he is alive, and his master plan is moving forward. Then surprise, this evil man goes home to celebrate Christmas with his family. It appears that Darhk has a wife and daughter, and a normal life. 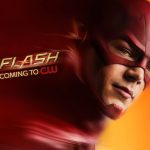 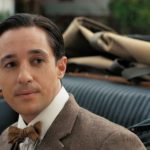