“You Can See Both” And More From The Sisters Press Conference

There’s a big movie opening this week. It’s called Sisters and it stars comedy duo Tina Fey and Amy Poehler. What movie were you thinking of? At the press conference for Sisters, Fey and Poehler shared their plan for dominating the weekend of December 18, when Sisters opens.

“We have a social media hashtag: #YouCanSeeThemBoth,” Fey said. “You can see them both, guys. It’s a holiday weekend.”

Their co-star in Sisters, Ike Barinholtz, had another suggestion. “There’s like seven Star Wars,” he said. “There’s only one Sisters.”

Here are some other interesting tidbits from the press conference.

This time Amy Poehler is the straight woman.

“When you have a part for someone who is sorta tightly wound in the beginning and then go crazy, you cast the person who is better at going crazy,” Fey said. “I just knew that Amy could play the back half of that better. What I tried to do here is saying, I tried to play it as ‘I was once the greatest ice skater in the world but now I’m in this wheelchair.’ The hottest girl really parties hard but you will never see me do any of it.”

Amy Poehler can’t remember whose legs those are.

In one of the crazy party moments, Maura falls through the ceiling with her legs dangling over the party. Poehler can’t even remember if she did her own stunt.

“Somebody asked me today if those were my real legs that burst through the ceiling,” Poehler said. “It was such a party, I don’t even f*ckin’ remember. It might have been my legs. I don’t even know, yo.”

Tina Fey didn’t do a keg stand, but did another stunt.

Kate does a keg stand at the party, but director Jason Moore revealed it was a stuntwoman, but only because Fey was busy filming another stunt for the movie.

“because I jumped into that sinkhole,” Fey said. “I climbed the fireplace partly but I didn’t get to come down from it.”

The Tina and Amy magic goes back before SNL.

We first witnessed the magic of Poehler and Fey together on Weekend Update, or maybe earlier if you want to quote some obscure sketch. Now we flock to their movies or their dual hosting gigs at the Golden Globes. They knew they worked well together long before they were on television, at the Chicago improv group Inside Vladimir.

“I think we learned pretty quickly we liked the same things,” Poehler said. “We liked speaking the same way. So much of comedy is finding your tribe because no one is very experienced. Everyone feels funny but you end up searching out people who like the same things as you or who get you. That was pretty quick good first dating period.”

Maya Rudolph plays the villain, but that’s all acting.

When Kate and Maura throw a party, they do not invite their old nemesis Brinda (Rudolph). Rudolph understood Brinda, even though that wasn’t her in high school at all.

“I stand by my statement that Brinda is a delightful d*ckhead,” Rudolph said. “She’s one of those people that held onto that feeling left out and made that her identity and carried it through life. She’s got this chip on her shoulder about trying to prove herself, but I really think it’s about being let into the party. The party of life. That’s all she wants. She keeps having to sneak in and dance outside the front window. I was not a Brinda by any means. I was a theater nerd and sometimes I would wear fancy hats to school. Some would call that a nerd. Perhaps a captain’s hat or a fedora depending on my mood, or my hairstyle. I was friendly and I might have smoked a little pot.”

It’s a big party, so a lot of the guests are other SNL alumni.

“There’s a bit of a shared vocabulary,” Poehler said. “I would even go a bit farther than SNL, but in the improv community there’s a sense of like a well-run emergency room. If you see a well-run emergency room, there’s not a lot of freaking out because you just don’t have the time. You don’t take up a lot of time talking about how something’s not gonna work or you can’t do it. You just do the best you can in the moment and you wish for the best and you’re around people that hopefully are more skilled and better than you at what they do. That’s just a tonally thing we’re all used to. We like working and feeding off of each other. There’s not a lot of ball hogs on our team. We all took great pleasure in other people’s jokes and there wasn’t a lot of feeling like we were competing against each other. We were feeding each other ideas and thoughts. That always makes for certainly a better experience but often times a funnier film.”

It’s official, more and more movies like Bridesmaids, Trainwreck, Spy, The Heat and Sisters are showing people that women are funny, and it was stupid to ever think they weren’t.

“I think a lot of the people who were saying that died,” Fey said.

Poehler added, “It’s really exciting always when new voices become commercial. It means there’s an audience for them. I still think that stories told from a female perspective are really interesting because there haven’t been as many. We’re not treading the same stuff. There’s still such a spectrum of stories told through the lens of female characters that are really interesting because frankly they’re newer and untapped. Were excited to tap dat aspect.” 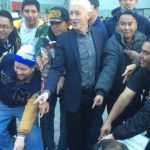 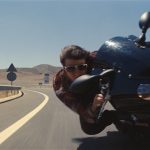