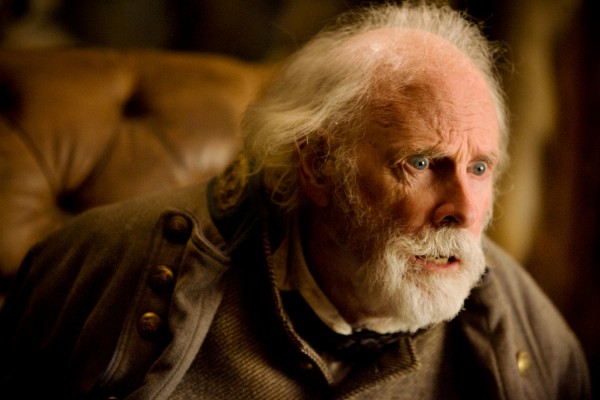 Bruce Dern in The Hateful Eight

Bruce Dern is one of The Hateful Eight. He plays General Sandy Smithers, a Confederate general who’s still bitter his side lost The Civil War. So when Major Marquis Warren (Samuel L. Jackson) shows up, they have some beef even before the hateful situation transpires. Warren ends up at Minnie’s Haberdashery after hitching a ride with bounty hunter John Ruth (Kurt Russell) who’s taking Daisy Domergue (Jennifer Jason Leigh) to hang. Trapped in a blizzard, The Hateful Eight are forced into a standoff as they suss out each others’ intentions, all captured in a 70mm frame.

After I got to speak with Dern about The Hateful Eight, he paid me a very Bruce Dern compliment. He said he liked our interview because “you do your homework, and you give a sh*t.” I didn’t have to do that much homework because Dern fills in the answers with such details, but here is our interview. The Hateful Eight is now playing in 70mm roadshow engagements and a wide digital release.

Nerd Report: For Nebraska, you said Alexander Payne didn’t want any of your “Dernsies.” Does Quentin want Dernsies?

Bruce Dern: He asked me specifically in two occasions for a Dernsy. The other actors were kind of wondering, “Why does he get to bump in and do something?” Quentin said, as a quote, “I can’t write that sh*t down that he does. I can’ write that. You don’t know when it’s coming, you don’t know how it’s coming but it always fits the story and is correct so they’re valuable. But I can’t write that.” In Nebraska, I was only allowed two Dernsies.

Nerd Report: I remember one was when you tell Will Forte “I’m here” at the end, I remember that.

Bruce Dern: The other one is when we look in the bedroom upstairs of my old house. June Squibb says, “This was Woody’s room. He shared a bed in here with Davey.” You see the little broken crib and all that. “He shared this room with Davey. He slept in the bed with him and he never got what David died of when he was two years old.” Will Forte says to me, “Do you remember that dad?” There was no line written, and my line was just, “I was there.” Alexander says, “I can’t beat that.”

Nerd Report: What were the Dernsies in The Hateful Eight?

Bruce Dern: A couple to Sam in his long speech, when I interrupt him. It’s like, “I get it.” He keeps going on and going on and going on and I say, “I get it. I get it.” Another one is with Channing Tatum. He said, “Okay, we’ll give it a try.” And I lean forward and put my hand out, shake his hand and said, “Thank you.” Everybody on the set said, “But that’s not in the script?” And Quentin says, “What’s the moment about? He’s just had his life saved. He’s got a little bit of a con too. He wants to live, so he thanks the guy for saving his life.” That’s a Dernsy.

Nerd Report: Have you worked with these 70mm Panavision cameras back in the day?

Bruce Dern: Panavision but not 70mm. They only made seven 70mm movies, I mean Cinemascope. The first was The Robe and then Lawrence of Arabia, and then Khartoum which starred Charlton Heston. I forget the other two, and the last one was It’s a Mad, Mad, Mad, Mad World which was in ’63. I never worked in a format, like here, where everyone is in every shot. Which means you’re a prisoner on the set. Even days when they’re just gonna see you in the background. I didn’t have a good time in Telluride because it was the middle of winter. You can’t go anywhere and you can’t get out. You gotta drive 180 miles to get a plane to go back on a commercial flight. They have a jet runway but it’s less than 100 yards, so I would never land a jet there, no way. Even Harvey and them didn’t come in. They’d go to Montrose.

I had never worked with anyone who was able to do what he’s done here, which is he made an opera. This is opera. It’s bigger than life but it still is a movie. But by that, I mean, that’s what the 70mm does. Yes, a lot of it has to do with the magnificence of the stagecoach coming through the snow and how tiny everything is compared to what’s really going on. The other thing is with the Cinemascope camera, I can shoot him, but I can’t pan to you because the camera will blur because it’s Cinemascope. You have to cut the camera after I’m on you. This is even in a scene with two people. And put it on tracks. Then you can move the camera on little railroad tracks but you can’t move it with the arm. That’s what takes the time.

The other thing that takes the time is you had to shoot every single scene eight different times from eight different points of view, because we’re all reacting to everything that goes on. The whole movie takes place in five hours. It runs three, but from like one o’clock in the afternoon until just after dark. It was a long shoot. We were there I think 161 shooting days, but we shot seven weeks back here. When we walked on the stage, he refrigerated it to 27 degrees. Oh my God, so we’d be sitting outside in Santa Ana and go inside 25 times a day, and that was not good for us. In Telluride it was okay because we were always at the altitude and there was cold wherever you went. But this was not cool and a lot of people got coughs. The crew would get it, we’d get it.

Nerd Report: Did having played the live version ultimately help you when you played the character on film?

Bruce Dern: At the reading, it worked as a play. That’s basically what this reading was. We all sat in a row, Quentin was the narrator and he’s the narrator in the movie. People got it in that form. Now the question to Quentin was, how do I put it in the camera? He had no idea when he had the reading, at least to us, that he was going to make the movie. He wanted to, he tried to, but from the circumstances of other people reading the script before and everything, he felt, “I’ll move on to something else. Everybody knows what I’m doing.”

There were two actors in the reading that are not in the movie. Jennifer was not in the reading. That was Amber Tamblyn. Channing Tatum was not at the reading. That was James Remar, who’s a Quentin favorite. Those are the only changes. He auditioned extensively actresses. I know my daughter met with him. Geena Davis met with him. Whoever’s out there in that age group met with him. Geena’s a little older but he wasn’t sure what the age had to be. How he picked Jennifer and where that came from, I don’t know. I don’t know how he picked any of the people. And he made it fun. It was fun. Grim, but fun. And I felt trapped in Telluride. That’s me, I’m claustrophobic, and you can’t get out. It was the middle of winter so you had to drive 180 miles to Montrose to get a plane that could go just to Salt Lake City to get you to L.A. You feel trapped because the sky’s overcast and it’s going to snow every day. If it snows, the planes won’t land in Montrose so you have to drive 600 miles to Salt Lake City to get a plane, because this is Western Colorado. This is the end of the Rockies where Telluride is, not the beginning. That’s over by Denver. From Telluride to Denver is a seven hour car drive and over two passes of 12,000 feet.

Nerd Report: Are you actually doing whole scenes in the background while we’re looking at someone else in the foreground?

Bruce Dern: You’re not in a scene but you’re there, so you’re there. And the actor who realizes he’s on camera all the time is the actor who succeeds in those scenes. Some actors go and take a nap. Not in this movie because it’ll catch you doing it, and he wants that. He wants the operatic thing of everybody being [active] and the camera sees that. It’s not tough because you’re in the scene. You’re still acting. You’re being hired to act and play a character, so play your character. And live with the fact that sometimes you’ll be in the background. Every single one of us had to go through that, because most of the scenes are two or three pairings of people over by the bar, over by the stove. Me, I’m alone on the fireplace and they had all had these big coats on. I had nothing but the simple little general’s uniform, without the coat even. It’s hanging on the peg, and I was cold. Because the fire is a fire, it’s a real fire. However, it’s not a fire that throws heat into the room because that would distort and make waves in front of the Panavision. And Bob Richardson is a genius. When you say Quentin made the movie, Quentin and Bob made the movie, and Quentin will be the first one to tell you that. He wouldn’t have done it without Bob. No way.