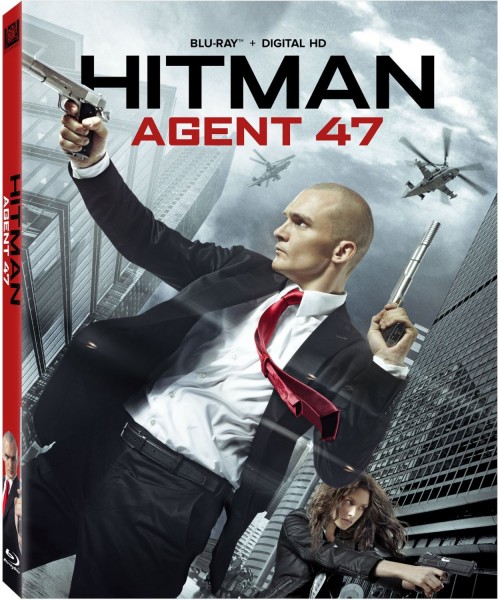 As a second attempt to bring the video game to cinema, Agent 47 learned its lessons from the first Hitman movie. Where HItman was happy to be derivative of the genre movies that inspired the game, Agent 47 takes those inspirations and pushes them to gleefully insane degrees. So we begin with the arms outstretched double guns, which was the video game doing John Woo, but it goes so insane I think John Woo would be proud.

So Agent 47 works with some familiar action tropes, including the old ducking under a subway train, rolling gunfire and empty factory set piece, but it incorporates these elements into much more vivacious sequences that don’t let pesky things like reality stop them from being awesome. You know my rule: “because it’s awesome” is the only reason a movie needs.

Gratuitous use of jet engines and zip lines made me happy. We’ve seen lots of factory action scenes, but this one has balls. Not actually a wrecking ball, but crazy violence. Except there was a wrecking ball in the deleted scenes, so it had everything! He even does something I’ve always wanted to see in a car chase. Everyone always tries to outrun their pursuers. Isn’t there a faster way to lose speeding pursuers?

The action is really good. It’s got some CGI but the visual effects are used for good ideas, to bridge real fights above and below the subway with a superhuman move, or use factory machineries to recklessly endanger bad guy lives. It’s wonderful mayhem and there are things I’ve never seen before, which is saying a lot because I’ve seen every action movie I can find.

There is a sort of Terminator quality as Agent 47 (Rupert Friend) and John Smith (Zachary Quinto) keep coming no matter what stands in their way. The characters have bulletproof skin, which is only a literalization of the survival rate of any cinematic action hero, but this movie has great fun with it. If we’re going to give them bulletproof skin, why not let them survive ridiculous dangers? 47 even asserts, “I’m not that easy to kill.” So, um, would you say that killing you would be difficult? Come on! You’re so close to saying it!

I dare say there’s even an adventure serial quality where Katia (Hannah Ware) and her partner escape one danger only to find themselves in more danger. It looks like the actors learned more than three moves for their fight scenes, and gave way to impressive stuntmen to make the edits a seamless blend of the best material. Director Aleksander Bach one to watch for composing such action in clear techniques, and mastering a tone of excessive unreality.

What I remember most from the original Hitman was that whenever they went to a foreign location, the subtitles specified “London, England” and “Moscow, Russia.” As if someone might mistake the London Eye for a different London or the Kremlin for a different Moscow. I kept waiting for them to cut to D.C. and say, “Washington, D.C., America.” Agent 47 does have that franchise continuity as they specify “Berlin, Germany.”

The film looks great on Blu-ray. All the foreign locations offer beautiful scenery, and even the subway platform is bright and colorful. Even the blue strobe lighting of 47’s first hit holds up in HD. The opening scenes have an industrial clanking soundtrack that sounds like Batman’s song in The Lego Movie. I couldn’t help singing along, “Darkness, no parents…” But it actually gives way to a fairly rocking soundtrack by the end.

Deleted scenes have even more action, and another wildly excessive torture scene. Other behind the scenes spots are fairly standard but show the filmmakers taking care to honor the game and craft some exciting action, and put together a world building comic book.

“Best video game movie ever” is a dubious honor, so I hope the approval of Franchise Fred gives Hitman: Agent 47 the love it deserves.