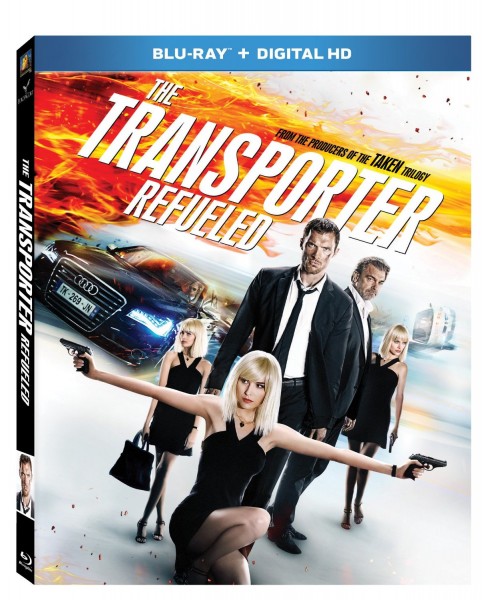 As Franchise Fred, I’m hesitant about reboots. When necessary, they can be as good as Casino Royale or Batman Begins, but every time there’s a reboot, it means the franchise has given up on further sequels. Fortunately, I’m not too hung up on continuity for the Transporter series. As long as there’s a British guy in a suit kicking ass, it’s fine. If it’s true they wouldn’t pay Statham to do a fourth movie, that’s cheap. This is part four. He deserves something for getting the series this far. But as a generic Transporter movie, I liked Refueled more than I expected to.

It’s better than Transporter 3, although 3 will always have a place in my heart for the line “I want to feel sex one last time.” There is no line that brilliant, delivered that straight faced in Transporter Refueled, but as far as setting up Frank Martin Jr. (Ed Skrein) to take over deliveries, it’s got enough fun stunts to make me want to see Frank Jr. again.

The action is still too choppy, but it’s better than Olivier Megaton. I’d linger on some of the impacts a few frames longer, but as I said, this is an improvement on all of Megaton’s films for Luc Besson. I wouldn’t be surprised if the fast cuts are a compromise between director Camille Delamarre wanting to show the action versus producers wanting it to look like modern shakycam action. Transporter Refueled is just a smidge on the right side of clarity.

The film moves. There are lots of action scenes with some fun personality. There’s an airplane sequence that’s great and ends in a stunt so crazy, I don’t think I’ve ever seen it before so it’s a true original, and a testament to how much good will Besson has that a French airport allowed it to be shot. A scene where Frank lets the car roll while he beats up some thugs is fun. Doing drifts in a roundabouts, should we call that a French Drift? Skrein is smooth going through Martin’s methods like they’re instinct.

The plot is so lifted from other Besson sequels, I can’t even be too critical because that’s sort of what we go to Besson for. In this, Frank Jr. and Sr. (Ray Stevenson) have been given a 24 hour poison, so they have to help some former sex slaves escape to get the antidote. No matter how it plays out, it’s just a variation on Transporter 3’s auto proximity poison or 3 Days to Kill’s CIA blackmail cure for cancer. What would be original is a Transporter movie where Frank is hired to do a difficult job, but executes said job as commissioned with no double crosses.

The female characters are all the typical Luc Besson fantasy of skinny girls. They were teen sex slaves, so at least the film is saying it’s wrong to turn young girls into sex objects, but the way the film dresses them it’s hard to say it’s 100% on the right side. Loan Chabanol doesn’t age in 15 years. What’s even the point of specifying time passage if it’s going to be that glaring? Details were never Besson’s strong suit.

The film looks great on Blu-ray. We’re seeing coastal France in HD, with saturated neon colors of the French Riviera sex district and pulsating night clubs. Yet even scenes in plain old parking garages have vibrant colors and details that make it all feel as sharp as Frank Martin’s suits.

Bonus features are basic and cover the film’s plot and stunts. The poor actresses really think they’re playing strong women. I mean, they think they’re playing four different characters, but no, they’re all the same, even the one that’s a different ethnicity. Look at every Luc Besson leading lady. Director Camille Delamarre speaks French so his soundbites are subtitled.

Transporter Refueled only has the same flaws most of these Besson produced/scripted franchises have. Where it counts, it’s got some fun action sequences. I would see Skrein in more Transporters directed by Delamarre, but we’ll probably just get some other Besson protege next.