So, I just found out about this Manga called Flying Witch and have started reading it. I’m not to far into the series yet, But I am in love with the visuals. Below you will find a short description of the manga.

“The comical story follows the 15-year-old witch Makoto Kowata and the other boys and girls in her daily life. With her black cat Chito, the somewhat aimless girl moved from Yokohama to live with her second cousin at Aomori in verdant northern Japan.” 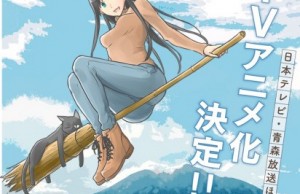 The Flying Witch was manga was launched back in September 2012. As I read more and more of the manga, I will either review it, or publish an update on how I feel about it, but I am already recommending the anime to people I know. Keep an eye out for it later this year.