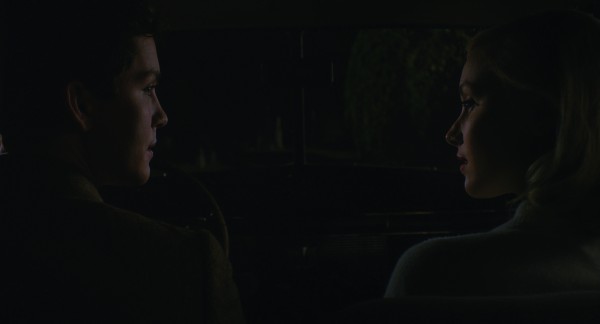 This is what Sundance magic is all about. I had not planned on seeing Indignation, but I ran into a publicist for it at another film. She asked if I was coming to see it later, and it turned out I had an opening in my schedule. So I asked for a last minute ticket, and I only got one because someone else did not show up. And it’s my favorite movie of the festival, so that’s how that works.

Marcus (Logan Lerman) leaves his Jewish family for a Catholic boarding school. He is focused on his studies so he can get a good job, but he falls for Olivia Hutton (Sara Gadon). On their first date, they have a sexual experience that leaves his virgin heart conflicted. As Marcus navigates his first romantic relationship, he also must defend his atheism and intellect in a setting that encourages conformity.

The screenplay by writer/director James Schamus, based on the novel by Philip Roth, brilliantly captures the complexity of a human reaction to intimacy. In the cinema, we are exposed to many portraits of hormonal teenagers who want to get laid at all costs. In reality, most boys are just as sensitive as anyone else. Even if they’re attracted to a woman, engaging with her can be confusing. There’s a sort of naive unfamiliarity that requires an adjustment period, at an age where the other party is no more equipped to help their partner through this development.

As much as there are sex acts and intellectual analysis of relationships and feelings, the characters of Marcus and Olivia are sweet. I wish all kids thought thought this much about their feelings rather than just acting out, as many of the other characters surrounding Marcus do.

Marcus’ roommates are of the latter variety, attention whores who can’t just be quiet and let Marcus be. It leads to a conflict and a confrontation between Marcus and Dean Caudwell (Tracy Lets) in the Dean’s office. It is one of the all time epic confrontation scenes, up there with the most heated of Aaron Sorkin scenes. Marcus can speak to authority with authority, being strong but not disrespectful.

The Dean is actually proud of the thought process Marcus exhibits, although he still has his own agenda. Caudwell has a minor point. Being strong-minded raises red flags, so you have to be careful. And sometimes just humor the establishment. The school requires attending chapel services. While Marcus has a point that his beliefs should be respected, just enjoy the pageantry of the services and dismiss the beliefs quietly. It’s not worth getting yourself on the watch list as a “difficult” student.

Another interesting dilemma faces Marcus with his mother towards the end, so I don’t want to spoil it. Essentially, she makes an impossible request using emotional blackmail. Her concern is founded on compassion, but it’s unfathomable to put this on her son. Fortunately, the way it plays out proves more complex than just a generational conflict.

I am so grateful for the chance to meet an intellectual, emotional behemoth like Marcus. Thank you, James Schamus for bringing this to the screen and essentially recommending the book for me too. This was a complete discovery for me and the kind of life-impacting cinema I come to Sundance to discover.