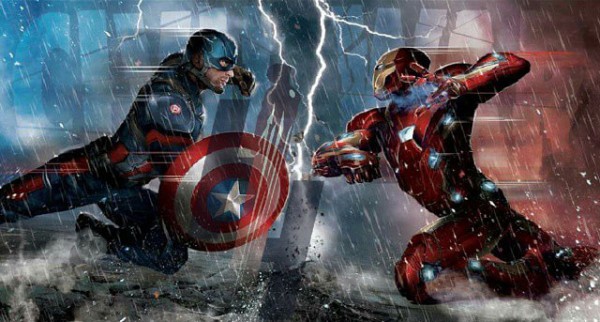 Birth.Movies.Death is reporting that Marvel Studios is currently test screening Joe and Anthony Russo’s “Captain America: Civil War” with the test audiences giving positive feedback on the highly-anticipated threequel. The website adds, “my sources tell me that the movie doesn’t pull any punches in the third act, and that if Marvel execs had been concerned about the film going dark places, those stellar test screenings have alleviated all those fears.”

“Captain America: Civil War” features most of the major characters from the Marvel Cinematic Universe, excluding Thor and the Hulk, including the first MCU appearance of Spider-Man, who will played by British actor Tom Holland. The film takes place months after the events of ‘Age of Ultron’ where the government decides they want to monitor the Avengers with a proposed act call the ‘Sokovia Accords’ with Steve Rogers opposing the new initiative. Tony Stark endorses the bill stating that it’s the right thing to do. The two Avengers clash and form two sides as they fight what they believe in.

Directed by Anthony & Joe Russo from a screenplay by Christopher Markus & Stephen McFeely, Captain America: Civil War picks up where Avengers: Age of Ultron left off, as Steve Rogers (Chris Evans) leads the new team of Avengers in their continued efforts to safeguard humanity. After another international incident involving the Avengers results in collateral damage, political pressure mounts to install a system of accountability and a governing body to determine when to enlist the services of the team. The new status quo fractures the Avengers while they try to protect the world from a new and nefarious villain. Starring Chris Evans, Robert Downey Jr., Scarlett Johansson, Sebastian Stan, Anthony Mackie, Paul Bettany, Jeremy Renner, Don Cheadle, Elizabeth Olsen, Paul Rudd, Chadwick Boseman, Emily VanCamp, Daniel Brühl, Frank Grillo, William Hurt, and Martin Freeman, Captain America: Civil War is set for release on May 6, 2016.