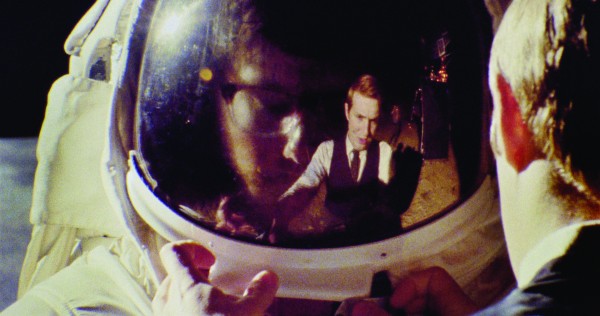 I once joked that the Paranormal Activity sequels should keep going back in time, making an 8mm silent film and then ultimately Daguerrotype. I was joking about the Daguerrotype although I challenge Jason Blum to do it. A silent Paranormal Activity would’ve been cool though. Well, they didn’t do that either, but at least now the found footage genre has gone back in time enough to use pre-VHS materials, and it works for Operation Avalanche.

Owen Williams and Matt Johnson (themselves) are CIA agents tasked with making a moon landing movie, in case Apollo 11 doesn’t actually land. As part of their mission, they infiltrate NASA undercover, and research Stanley Kubrick’s techniques from 2001: A Space Odyssey.

The ‘60s era footage effect makes Operation Avalanche look better than modern found footage movies. Matt and Owen want the film of their findings to be good so they can be promoted in the CIA. It’s really fun to see the Lionsgate logo in Academy Ratio black and white 16mm. Even when they get better cameras and the bulk of the film is in 1.85:1, the saturated colors give it a beautiful old school film look, even if it is a digital effect of degrading the image.

Because filmmaking is the actual mission, there’s no need to remind us all the time that they’re filming. Besides, they’re undercover so no one else is supposed to know. Matt is overeager but he’s not the typical douchebag that found footage movies need in order to work. Only a douchebag would keep filming in an emergency, but when the emergency is a NASA coverup you would keep filming to expose them. At one point he does say he doesn’t care how much film they burn, but I took that more as a lovely reminder of the finite quality of pre-videotape materials.

Operation Avalanche is a love letter to Kubrick’s visual effects, and they got a good Kubrick lookalike and a fun reference to room 237. Johnson and Williams have good comic timing, in their delivery and their editing.

They take the conspiracy theory seriously though. They’re not making fun of people who think the moon landing was faked. They’ve actually suggested that they did such a good job faking it, that the mere suggestion of a conspiracy would make one sound crazy.

There is a behind the scenes story of how Williams and Johnson stole shots at NASA, but the film doesn’t need that gimmick to work. It’s also not in your face about where they filmed. They made the location part of the story, not vice versa. Most importantly, they made a good movie, so you won’t be left lamenting that the making of the film overshadowed the film itself.