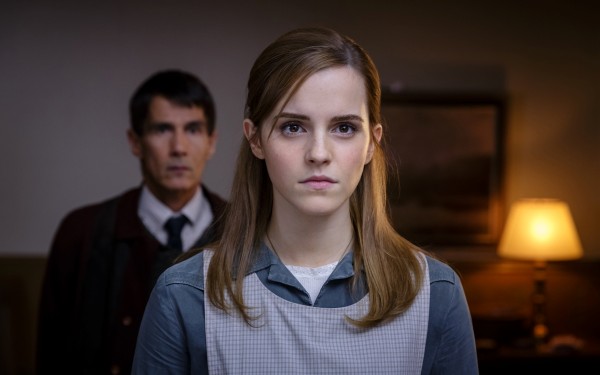 Regression is the new movie from the director of he Others and Open Your Eyes (the original Spanish language basis for Vanilla Sky). Ethan Hawke stars as a detective investigating a case of Satanic ritual abuse of a young girl (Emma Watson), using regression therapy to uncover the memories of the cult. I got to speak with writer/director Alejandro Amanebar by phone about his latest film. Regression is now playing in theaters.

Nerd Report: When did you first hear about regression therapy and think there could be a movie there?

Nerd Report: Ethan was very impressed by how you use the camera to tell the story. Did you have a different approach in style to this than your previous movies?

Alejandro Amenebar: I like trying to find the most accurate style for each movie. In this case, I really admire all those American thrillers from the ‘70s. Marathon Man, All the President’s Men, and of course the horror movies from that time. We wanted to get some style from those movies which meant to try not to do many crazy things with the camera. The light, we decided for it to be more expressive or express an itch that the camera tried to keep still most of the time. Of course, focus on the work with the actors. The other thing is that we were avoiding digital effects. In one of the scenes, we tried and we realized that it didn’t work with this movie. The movie was analogical somehow.

Nerd Report: In what scene did you try the digital effect?

Alejandro Amenebar: The scene of Rose, the grandmother, when weird things are happening in the house. We tried there and we decided to avoid it.

Nerd Report: When you’re writing and directing a very intense film does it stick with you?

Alejandro Amenebar: When you write, you have to try to get into the story. Of course, you try to get into the mood and that means that I am always listening to soundtracks. In this case, I was listening to many of Jerry Goldsmith’s soundtracks. In the case of shooting, I try to be on focus of course. That means that sometimes you don’t even remember what you were doing apart from shooting. As compared to actors, some of them can get rid of the character right after you say “cut.” They really put it aside. Some others stay in character. In my case, I guess I cannot get rid of the movie for a while.

Nerd Report: Did you do additional research on cults or even police work for Regression?

Alejandro Amenebar: Yeah, I was into Minnesota and living there for a couple of weeks, visiting police stations. That was very, very interesting, and visiting churches as well. I have to say, I was very well treated there.

Nerd Report: Did you shoot with traditional film or digital?

Alejandro Amenebar: We did digital. We were going to do it analogical with real film because our DP insisted on that. That has to do with what I was saying before, that everything that had to do with digital, the movie rejected it. But we were shooting in Toronto and by that time they had closed down the laboratories for film in Toronto. So we decided to go digital.

Nerd Report: Did you learn to appreciate digital while you were working with it?

Alejandro Amenebar: Oh yeah, I love it. I realized one year before shooting this one, because I was doing a music video, and we shot it in digital. There was something about film itself that made you feel as if you were in the past century. I prefer digital for sure. I understand the difference. I remember my DP explained me the difference. It has to do with grades of color. The real thing is is you go faster and can focus more on the work with the actors when you work in digital.

Nerd Report: How difficult was casting for Regression?

Alejandro Amenebar: We were very lucky. I really wanted to work with Ethan for many years. I’ve been following his career and I thought he could be a very interesting guy, and he was. He understood the nature of this project. The same happened with Emma. So it was quite fast I would say.

Nerd Report: Did you have to direct Ethan to appear so haunted, or had he already decided on that?

Alejandro Amenebar: Well, when he read the script for the first time, the first thing he said to me was, “Who is this guy? I don’t have much information about him.” And I said, “Well, let’s try not to give that information about the past life of this detective. With a few elements and playing with what’s going on and with his interaction with the rest of the characters, let’s try to find out who he is.” So I think he played it in that way. Also one thing he said when we were rehearsing that kind of shocked me was that this guy is slipping. “I can feel this guy is slipping already.” So he was able to keep that idea all the way through he movie.

Nerd Report: Are you fully making English language movies now? Do you still think of any for Spanish?

Alejandro Amenebar: It always depends on the story. Of course, in the case of this story, once we realized it was going to be about Satanic ritual abuse and it’s a phenomenon that really took place mainly in North America, we knew that we would have to shoot it in English. That’s the great thing about making movies. You don’t know where you will end up, or which language you’ll end up doing the movie.

Nerd Report: What are your favorite scary movies?

Alejandro Amenebar: Of course The Exorcist is a great movie and Rosemary’s Baby. I loved The Omen, the first one. I saw that when I was a child. Alien. I guess we tend to be impressed by the movies that we saw when we were children, so all those movies from the ‘70s and the beginning of the ‘80s were very impressive for me.

Nerd Report: Did you know back then that you wanted to make scary movies?

Alejandro Amenebar: When I was a child, I was scared of anything. For me, making horror movies has also been a way of getting rid of my fears. It’s true that I was scared of anything, but at the same time I loved horror movies. At that time, I didn’t know I wanted to be a film director. I didn’t even know what that was, but I remember writing short stories and most of them were mystery stories, and doing drawings for them. Then when I did my first short movie, it was a horror movie. Then my first feature was horror. I feel particularly attached to that fear, although I think in the case of Regression, although it plays with many horror elements having to do with the Satanic ritual, etc., I think it really is a thriller. I wouldn’t define it as a horror movie.