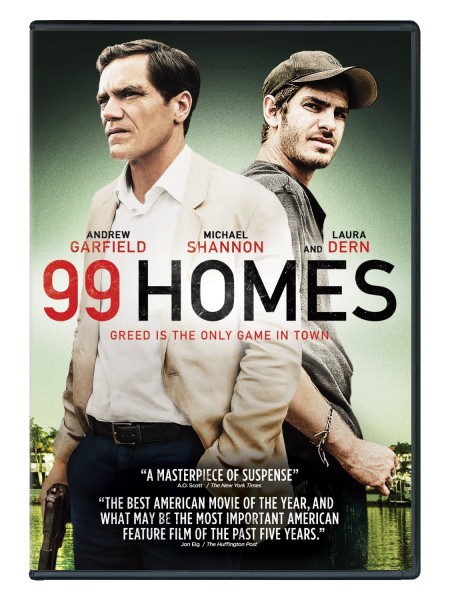 99 Homes was one of my favorite movies of last year because it turned a very relevant issue into intense drama. The housing crisis is not entertaining, but seeing a victim of it (Andrew Garfield) corrupted by the dark side (represented by Michael Shannon) put a human face on it.

On Blu-ray, I discovered how bright a film 99 Homes is. It’s mostly outdoors in the sunlight, shining a harsh light on the stark evictions led by Shannon’s character. There is a metaphorical power in keeping dark subjects in bright clarity, but it’s also just a colorful picture on a superficial level.

The bonus features are minimal, with the main one being writer/director Ramin Bahrani’s audio commentary. He balances both technical and political aspects, including a lot of attention on the lighting and editing, while sharing some details about how he wasn’t legally allowed to name the banks who were the worst offenders of the film’s subject. One deleted scene features Shannon explaining another infuriatingly corrupt real estate scam, but the film does a great job already with dramatizing the corruption we’ve all enabled.