The real title of the episode is ‘Beacon Of Hope’. But that’s too boring for an episode about a woman who can control a huge swarm of mechanical Bees with her mind. And those industrious bees can even come together and become a dude in a bad superhero suit, to fight our heroes mano a mano. Yeah it’s that kind of episode. But I’m not complaining, because Arrow is usually so dark, and this is a kind of change of pace for them. Our Super Villain’s name is Brie Larvan, and we’ve seen her before on The Flash.  Barry was able to stop her with Felicity’s help. So now it’s a Felicity verses Brie rematch. This could ‘bee’ fun, and a little silly.

Overwatch is off the team, and that leaves a void that only someone terrific can fill. (That’s a hint) And while Felicity may have stepped away from team Arrow, for now, she’s still right in the middle of all the action. This week’s villain is Brie Larvan, and she was last seen on The Flash. Team Flash thwarted Brie’s evil schemes, with Felicity’s help, and got her locked up for a good long time. But Brie is a whiz with computers, as well as bees, and she hacks the system and paroles herself early. Do dangerous convicted felons get unsupervised Internet access in prison? I guess they do in this world.

Brie heard about Felicity’s surgically implanted spinal bio-chip, the one that got her walking again. And now she’s willing to kill to get one for herself. Brie has some kind of growth on her spinal chord, and after she has it removed, she’ll be unable to walk. Unless she has the miracle chip that allowed the permanently crippled Felicity to walk again. The good news is that Palmer Tech has been doing research on releasing the chip to the public. But the bad news is that the chip cost a small fortune to make, and only those with Trump or Kardashian money can afford it. So what’s a villainous bee lady to do? Steal it of course. Brie kidnaps the company executives, and threatens to kill them if Felicity doesn’t turn herself in. Honestly, I thought Brie was going to dig the chip out of her spine. Which would have been gross. But all she wants to do is steal the plans and make a chip of her own.

Brie’s bees swarm Palmer Tech, trapping Felicity, Thea, and Felicity’s Mom inside, with the execs and staff. While Oliver, Diggle and Laurel work on defusing the bee situation from the Arrow Cave. But the mechanical bees are like mini computers, and they need help from someone with mad computer skills. Luckily Curtis stumbles into the Arrow Cave at just the right time. Curtis is the inventor of the chip, and he’s a computer nerd, and in the comics they call him Mister Terrific. So, with Curtis’ help they are able to hack the bees. It takes a few tries, and the ladies run around the building a lot avoiding the bees, but Curtis finally hacks in. He also saves Oliver from a bee that somehow got inside him and started replicating. He uses Black Canary’s sonic scream.

Green Arrow, Black Canary and Spartan break into Palmer Tech to save the ladies, now that the bees are under Curtis’ control. But Brie regains control of her minions and has the swarm merge, becoming a buff dude in a funky leather uniform. The Bee guy fights our heroes and is pretty much unstoppable. Until Felicity uses electricity (it rhymes). She breaks a standing lamp and thrusts it into Bee Guy, shocking the bees. So now everyone is safe.

Does Curtis become part of the team? Not in this episode. He goes home, totally overwhelmed by it all and tells his husband that he’s done with Heroics. But that doesn’t mean that Team Arrow won’t press him into service again, now that Felicity is working full time at Palmer Tech. And in DC Comics, Mister Terrific does become a hero, using brains and advanced technology instead of superpowers. So we’ll have to wait and see if Curtis joins team arrow and slips on a mask. I just hope Curtis doesn’t starting lying to the one he loves. Oliver’s already tried that, and it didn’t end well. And at episode’s end, we see that Merlin and Darhk have found a new Ally, its Andy, Diggle’s brother. STAY TUNED!!!

Side Note: At the end of the episode, Felicity tells Brie; “You could have just asked.” Referring to her elaborate attempt to get the blueprints and build her own chip.  That was my thought exactly.  AND,  the flashback is about finding some magic idol on the island, blah blah blah…boring waste of time. 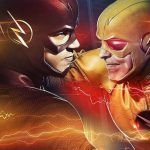