I think Gotham works best when Jim Gordon is the focal point. This time around, Jim is in prison for murdering Theo Galavan. Edward Nygma alias The Riddler, set him up to take the fall. Being the man Jim is, he’s not crying about what happened, he’s ready to quietly do his time. Unfortunately, the corrupt Warden has other ideas. After weeks of doing hard time, Jim is moved into F wing, the ‘world’s end’. It’s where the worst of the worst go, and where a lot of unfortunates meet their end. A lot of prisoners in F wing were put there by Gordon, or his department. So he doesn’t receive a warm welcome. In fact, the Warden recruits an inmate named Weaver to make sure Jim gets what he deserves.

Harvey comes to visit Jim. He wants to see how he’s doing, and let him know that he’s still out there trying to clear his name. Harvey is gruff, but he’s a good friend. And unfortunately, when asked about Lee, he has to tell Jim some hard news. Lee lost the baby. And she’s left Gotham. Jim takes it hard, though Harvey urges him not to let this beat him. Jim walks away dead inside. Back in F wing, Weaver attacks Jim. But an innocent young man named Puck intervenes, stopping Weaver from doling out too much damage. Puck thinks Jim is a hero, because of all the good he’s done in Gotham.  And Weaver is sent to cool his heels in solitary confinement.  But this isn’t the end of it, not by a long shot.

Back at Gotham’s dark version of PeeWee’s playhouse, Oswald Cobblepot bonds with his Dad, Elijah. He’s played deliciously by Paul Reubens. At first I thought Oswald was putting on an act, to somehow scam the rich old man. But he’s actually very genuine and loving. Oswald even comes clean about his evil past, as the Penguin, not knowing what reaction to expect. And Elijah looks into his eyes and tells him that he’s not that man anymore. It’s a great father/son moment. But this is Gotham; so happy endings are hard to come by.

Elijah’s wife Grace, and her two kids are up to no good. They don’t love the man. They love his money. And now that Oswald is in the picture as Elijah’s one true heir, they’ve got some mischief to make. They tell Elijah about Oswald’s past, as the Penguin, so he’ll disown him. But Elijah already knows. Then Grace has her daughter try to seduce Oswald, to turn him against Elijah. Oswald rejects her. So Grace decides to kill Oswald, using poison. But Elijah drinks the tainted drink instead of Oswald. And Elijah passes away, which is an emotional blow to Oswald. And Elijah didn’t have time to change his will, so his killers will get everything. I wonder if this injustice is what transforms Oswald back into the evil Penguin.

There’s one good guard in F Wing, and he tries to look out for Jim. He warns him that Weaver is already back, and out for blood. And he doesn’t waste any time.  To show Jim he means business, Weaver has some inmates attack Jim’s new friend Puck, almost beating him to death. Then, during movie night, Weaver moves into position to knife Jim and kill him, as the Warden directed. But before he can act, another inmate attacks Jim, knifing him several times. Jim dies, apparently. But as it turns out, Harvey went to the mobster Falcone for help, and with the good guard’s assistance, they fake Jim’s death to break him out. But Jim isn’t the type to abandon a friend, so they spring Puck as well.

Once they are out and free, Jim and Harvey meet with Falcone. He gives Jim two options: He can put Jim on a plane and get him out of the country. Or he can put Jim up in a safe house in Gotham, so he can attempt to clear his name. Jim choses to stay in Gotham. But again, happy endings are hard to come by. Puck is dead. But before he passed, he did get to see his new friend Jim one last time, which made him happy, and he died free. STAY TUNED!!!! 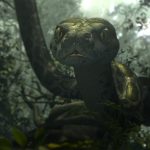