Barry’s moving pretty slow without his speed, but he’s still a hero. Just in case you forgot; Barry had to give up his speed to rescue Wally West from Zoom. And now he has to solve crimes the old fashioned way, with his brain. It’s been a while since we’ve seen Barry do actual CSI stuff. But he is a forensic scientist, and before he became the scarlet speedster, that’s how he helped the police catch the bad guys. So now he’s back at it, but when Wells is kidnapped by a meta-human, Barry’s still willing to jump into the fray, even if it means getting beat like a drum. That’s the sign of a true hero, because Wells is a jerk. I know he is part of the team now, and that he’s not evil, but he is unkind and grumpy, and pretty tactless. Now that the breech is open between worlds, Wells starts the episode with a bad case of the ‘I told you so’s.’ He blames Barry for everything. Which is kind of true, but why kick a hero when he’s down?

Meanwhile, back on Earth-2, Zoom is holding Caitlin hostage in his evil lair. And guess who else is there?   It’s Killer Frost, Caitlin’s evil doppelganger.   The last time we saw her was when she fought Zoom, giving Barry and company enough time to escape. I assumed she was dead, but Zoom has been keeping her around, and caged. The guy in the iron mask is still there too. And he’s still trying to tap out a message on his cell’s glass wall. Needless to say, Killer Frost is a little tired of it. And to be honest, so are we. They need to just go ahead and reveal who it is already. They have been milking this mystery way too long. I still think it’s a version of Jay that isn’t evil. But we’ll have to keep waiting to find out. Anyway, Caitlin and Killer Frost make a deal. If Caitlin can get her out of her cage, Frost will help her escape and get back to Earth-1. And if that deal sounds too good to be true. You are right on the money. Because as soon as Frost is free, she turns her powers on Caitlin and tries to kill her.   Remember, her name is ‘Killer’ Frost. But Zoom speeds in and saves the day, killing Frost with her own icicle. He does love Caitlin. It’s a weird, creepy kind of love. But at least he resolved not to kill her. In fact, he promises to take her back home, to Earth-1. He also promises to pretty much devastate the place. So it’s not all good news.

Harry Wells finds his daughter Jesse. But she refuses to have anything to do with him. She’s still a little miffed that he committed murder to try and save her from Zoom. So Harry doesn’t get to take Jesse home, but he does get taken. A meta-human named Griffin Grey kidnaps Harry Wells, thinking he’s Harrison Wells from Earth-1. You see, Griffin needs a cure, and it’s a rush job. He has super strength, and every time he uses it, he gets older. So Grey wants Wells to cure him before the eighteen-year-old kicks from old age. But Wells isn’t the Wells he thinks he is. And he has no idea how to stop the aging process. It’s a good thing team Flash is on the case. Despite Harry’s continued bad attitude, they still want to save him. They first rescue attempt fails of course, because team Flash is minus the Flash. But Cisco and Jesse make some adjustments to Barry’s suit, that will allow him to survive a super-strength punch. So they try again. And this time, Barry is equipped to survive Grey’s attack. Though the effort ages and kills Grey.

Harry Wells is saved, and daughter Jesse forgives him and moves back into Star Labs. But all is not right with the world. The breech between Earth-1 and Earth-2 is still open, which will allow Zoom, and all manner of badness to come through. So the world needs The Flash. That’s why Harry suggests creating another particle acceleration explosion, to duplicate the conditions that gave Barry his speed the first go-round. But how safe is that? The first time it happened, Barry was almost killed, and was comatose for months. So is this really a viable plan? STAY TUNED!!!!!

SIDE NOTE: Wally thanks the Flash for giving up his speed to save his life. And Iris still doesn’t tell Barry how she feels about him. Though he probably could have used a confidence boost this episode… And Wells refers to his daughter as Jesse Quick. Does this mean she may become a speedster soon? In the comics, Jesse Quick uses the drug Velocity-9 to become super fast. And what about Wally West? In the comic-world he becomes Kid Flash. Will this second particle acceleration explosion affect him as well? 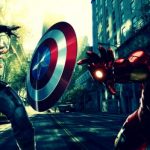