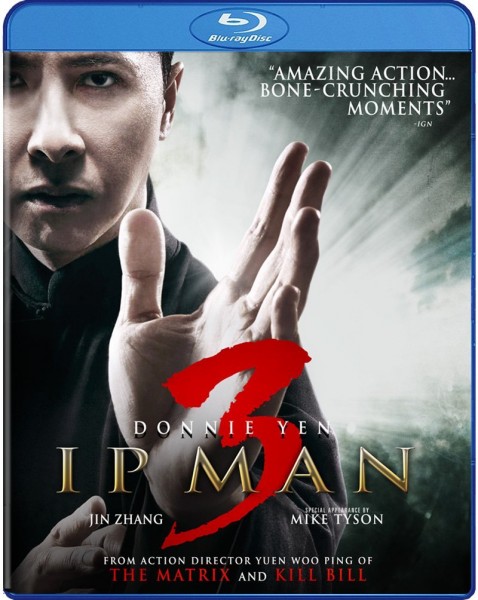 When Ip Man 3 came out in January, I got to interview Donnie Yen and Mike Tyson. I didn’t have time to write my review before I left for Sundance, so now I get to review the Blu-ray. The third in Yen’s saga of the master kung fu teacher reaches a long-awaited point, yet remains faithful to the interpretation of the character in the previous two films.

Beginning in 1959, Ip Man 3 answers the Bruce Lee question immediately instead of building it up any further. I think this is smart, because rather than setting even more impossible expectations, it gets it out of the way. There are some CGI visual effects that I imagine were emphasized in the 3D version of the film, and a lovely foreshadowing of Lee’s “flow like water” philosophy.

These films have a great way of addressing the stages of Ip Man’s life with fictional adventures that could have happened in private. He was Bruce Lee’s teacher, and he did survive Japanese occupation (in the first film), but bouts with gangsters may have been exaggerated. Either way, the films celebrate the legends.

Ip Man (Yen) is still gracious. He makes friends with the parents of a child his son got into a schoolyard fight with, and takes the bullying child to dinner. There’s a parallel in Frankie (Tyson), who is introduced playing with a child, but he’s a dangerous gangster boss. Gracious attitudes go both ways.

The fight choreography remains excellent, although there is more emphasis on punching towards and throwing things at the camera. That would have been great in 3D. In 2D it looks like old Clint Eastwood movies, although Eastwood never kicked. The camera flows like water through the martial arts combat.

Tyson’s English is subtitled too. Take that for what it is. He does have some Chinese lines.

Like the first two Ip Mans, Ip Man 3 is fragmented. The first half focuses on Frankie baiting him into a fight. That is settled about halfway through and the second half is an entirely different conflict. At this point, that’s the Ip Man tradition.

The Blu-ray looks great. With a perfectly clear picture, you can see all the detail restored to historical China. It has a sort of florescent green tint, which must be what the world thinks martial arts looks like thanks to The Matrix.

There’s a surprising amount of behind the scenes features, at least as much as an American movie would have. Behind the scenes footage shows that people still get hurt. Not quite like Jackie Chan outtakes but all physical action has risks. On set interviews show that Yen is very grounded and real, embodying the humility of Ip Man.