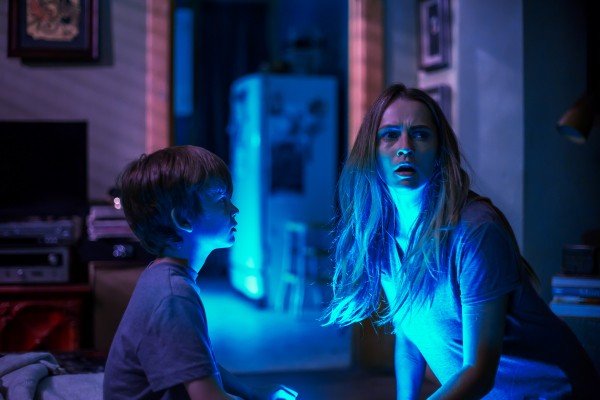 Lights Out has a strong premise for a horror movie and executes scares like a horror master. If you saw the short on YouTube, director David F. Sandberg and screenwriter Eric Heisserer have honed that concept and elaborated on other ways in which the terror can manifest.

Diana (Alicia Vela-Bailey) is a creature who only appears in the dark. You can buy yourself some time if you’ve got some light to shine and make her disappear, but there’s always some form of darkness in which she can hide. We see that in the opening scene where she stalks a man in a fabric warehouse.

The rules are clear and Sandberg uses the light and dark space expertly to craft scary sequences. The actors really sell it too. Teresa Palmer and Maria Bello react to Diana so convincingly, so vulnerably, that we believe she is real in their world.

Rebecca (Palmer) is estranged from her mother Sophie (Bello) but gets involved again when her brother Martin (Gabriel Bateman) is having trouble. The family drama is legitimate. As Rebecca’s boyfriend Bret (Alexander DiPersia) points out, is she trying to help her brother or hurt her mother? Even without Diana stalking them, how do you deal with a mother who believes something like Diana exists?

The backstory is told in different ways so it’s not all exposition. Rebecca finds an audio recording, one flashback is portrayed like 8mm film. Rebecca is saddled with a few clunky lines, like asserting that Sophie’s husband was her stepfather, not her real father. Way to drop that exposition out there. The resentment towards the biological father never really becomes important.

Lights Out really pays off, especially everything about Diana. The last 20 minutes are as scary as the original Halloween. Lights Out does for fear of the dark what Halloween did for slashers. Sandberg and Heisserer play with all the different kinds of light sources one might find in a modern day house, including our basic light switches, candles, crank flashlights and some clever surprises. Even in the dark, Diana is always well lit so you can see that creepy silhouette. Vela-Bailey’s body language is killer too.

Fear of the dark is something that is sometimes taken for granted in horror, resulting in some lazy horror movies. The makers of Lights Out were too ambitious to settle for just dark scenes. They made the light a power the survivors could wield, and it makes Lights Out the most inventive horror movie of the year.