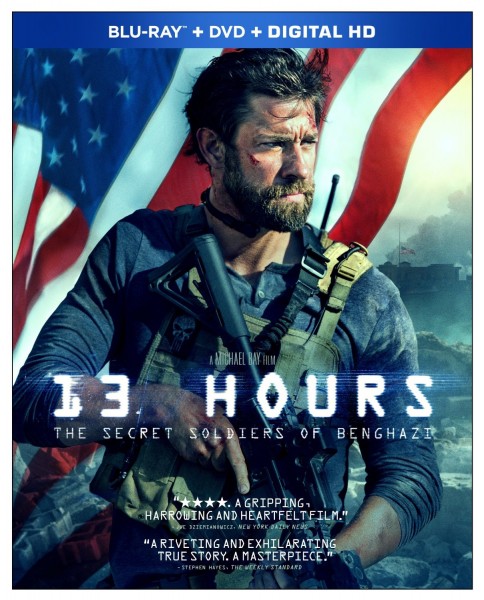 I missed 13 Hours: The Secret Soldiers of Benghazi in theaters because in January, the Television Critics Association and Sundance took all of my time. It’s exciting to get to discover a new Hollywood film at home on Blu-ray, and 13 Hours is a great movie.

Director Michael Bay creates a sense of the climate in Benghazi, Libya for Americans. They are looking everywhere at everyone and anything oculd be a threat. It’s also got the Michael Bay sort of hero worship in a real world context. We see buff guys working out, because our soldiers are gods.

The film builds and builds to the inevitable attack, and then escalates. The action is massive enough to be impressive, but not awesome. It’s respectful. People really died in this firefight, but we can also marvel at the incredible feats they performed to minimize American casualties as much as they did.

The military tactics are clear to the layman but seem authentic. The way the team shares information, only one needs to see something for the entire group to have all the information. One spots two guys on the balcony and shares that so everyone can make decisions accounting for those enemies. One points out enemy targets using a night vision sight so now everybody knows where their attackers are.

The cast is great both as individual characters and as a unit. John Krasinski is getting a chance to play against type. Of course it’s no surprise to me that he is convincing because actors act, but this is a good chance for him to prove it to others. James Badge Dale, Pablo Schreiber, David Denman, Dominic Fumusa, Max Martini and David Costabile are all people we see in lots of movies but it’s good to see them given really juicy roles to bring to life. The balance the bravado and camaraderie with real humanity and professionalism.

The Blu-ray looks great. 13 Hours is hot and sweaty like all Michael Bay films but not quite as orange. It’s greener and yellower, although when the battle begins, fire glows in Michael Bay orange. In some of the smoky wreckage you see some digital artifacts and halos, but what can you do? It’s a brutal, chaotic film.

The bonus features are all thorough and well done, if a bit dry. I mean, they’re giving credit to the real soldiers and trying to be objective about the real event, so they’re not going to be too outside the box. They do capture some of what it’s like to be on a Michael Bay set, if a tad more restrained because of the subject matter.