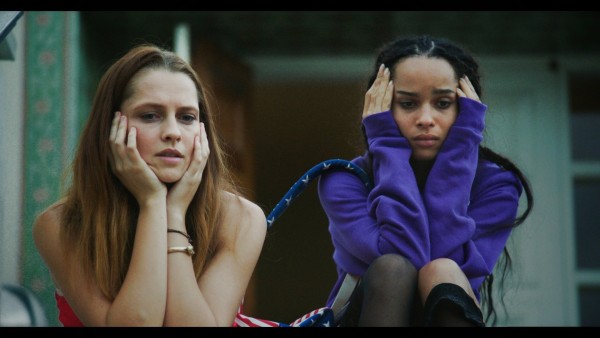 When I’m at The Sundance Film Festival, I don’t usually see short film blocks because there are too many features to see. It’s hard for readers to find shorts after film festivals too. Sundance Next Fest offered me a chance to see some of the shorts I’ve been missing out on, and Too Legit was so good I have to put it on your radar to seek out wherever it may be available after Sundance.

In a world where Rep. Todd Akin was right and women’s bodies do shut down pregnancy in cases of “legitimate rape,” Sully (Zoe Kravitz) tries to determine whether her rape was legitimate or whether she’ll need to get an abortion on her own. This is a scathing satire of rape culture, and jus to be clear, it’s science-fiction. Akin was way wrong. Writer/director Frankie Shaw has a scathing, biting voice.

The fact that every character plays rape culture straight shows how absurd the discussion of rape in society is, only in real life we allow these ridiculous statements to continue. Sully said no but even she questions whether she “asked for it”  or not, because of all the social pressures to make her feel like she did. And then, if only she can convince her own body she was raped, nature will take its course.

Sully ends up negotiating with her attacker Mike (Nate Corddry), who expresses all the male entitlement as a melodramatic victim. The film addresses all the rape myths by way of adult characters sympathizing with the wrong party, but playing it like they’re in a serious drama which is actually the world women are living in writ large.

Teresa Palmer plays Sully’s supportive friend who introduces all the concepts of legitimate rape/shutting down and she’s an exquisite straight woman. Clark Gregg plays a doctor and Lauren Weedman plays a dean and you can feel all the anger the actors and filmmakers have about injustice channeled into these satirical representations of the rape culture establishment. Kravitz plays the drama of her character looking for answers to something that should never be questioned in a just world.

This is how great satire works. We can laugh at how ridiculous an extreme scenario is and perhaps channel some tragic social norms into something positive. A rapist might be too far gone to ever get the message, but it can reach the people who don’t understand why it’s a problem. Normally it takes suffering personally to force anyone to reconsider their prejudices. Hopefully a film like Too Legit can make the world a more compassionate place with no personal suffering required.