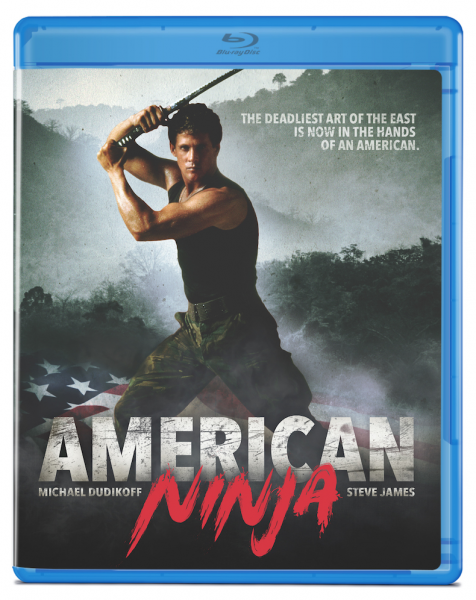 Of all movies with the word American, American Ninja is the most evocative use of the prefix. Beauty, Pie and Snipers are all things that could be American, but ninjas are Japanese. How can there be an American ninja??? Olive Films has given four of the five American Ninja movies a Blu-ray release full of bonus features with Michael Dudikoff and the various directors.

American Ninja is of course the best one. It’s an inspired introduction to a new action hero. Joe Armstrong (Dudikoff) is just minding his own business when he has to spring into action with his ninja moves. The first film also contains one of my favorite ‘80s movies cliches, where the loudmouth bully Curtis Jackson (Steve James) keeps making fun of Armstrong until they fight and Armstrong wins, so Jackson says, “You’re all right, man” and they become friends. James is the MVP of the series. He’s so charismatic. s

The first film also looks the best on Blu-ray, either because it was filmed the best or simply got the most attention for its HD transfer. Shot in the Philippines, the bright sunshine makes the green forests and military base shine. It also has the longest behind the scenes feature with Dudikoff, costar Judie Aronson, director Sam Firstenberg and producer Avi Lerner. Firstenberg also does commentary on the first two movies, which he directed, and he is a contagious, engaging personality telling stories about the films.

American Ninja 2: The Confrontation is very much Armstrong and Jackson on another mission. It’s still Firstenberg directing so it has the energy of his action sequences. It loses a bit of the joy of the origin story, but it would be equally damaging to keep redoing the origin story. Perhaps it was a tad rushed after the success of the original, or perhaps you just can’t recapture the magic, but had they continued making Dudikoff/James buddy movies they would have had something.

Ninja 2 still looks good on Blu-ray. Moving to South Africa, the setting still provides an exotic locale. The picture has a little more digital noise, a problem which will only get exacerbated as the series continues.

I saw American Ninja 3: Blood Hunt for the first time watching these Blu-rays. Knowing Dudikoff did not return,the introduction of Sean Davidson (David Bradley) pales in comparison, but what really makes the third film suffer is the loss of Firstenberg. At least James is still in it. Director Cedric Sundstrom was working at a disadvantage with a lower budget and it was his first big American movie, where Firstenberg had practice. The fights feel a little clunkier, although there are still a few attempts at outrageous action sequences underwater and on motorized hang gliders. The film looks oddly dubbed, even the American characters.

The Blu-ray looks filmier and you see the grain. The underwater fight is gloriously clear and blue, and the stockyards are well dressed to create colorful arenas for fight scenes. Dirt roads and jungles show the texture of the environment, and armies of blue and red ninjas stand out.

Sundstrom does not give an audio commentary but gives an interview in the 12 minute behind the scenes feature. Dudikoff appears from his previous interview but there’s no new interview with Bradley. Bradley’s audition tape is powerful. He’s just in a blue room on glitchy VHS. They even taped over something else so you see the green lines in the beginning. But he hits pads, poses and kicks a sparring partner, and that transcends VHS. That’s what mattered so you could see why he was entrusted with the American Ninja franchise.

American Ninja 4: The Annihilation had a great concept, putting the two American ninjas together, but all that ends up being is half a movie each. Davidson gets captured so hey have to call Armstrong to rescue him. The fights somehow gets worse, and slower like they hadn’t even learned the choreography yet when they filmed the fights, and there are long, awkward pauses in the dialogue. It’s also the cheapest feeling American Ninja. There aren’t even hang gliders, just open forests and rock quarries in which to stage generic fight scenes.

There is a ninja training gauntlet that is kind of cool, but even the crazier moments fall flat. A ridiculous jump cut magnificently shows Armstrong become the ninja, but even catching a crossbow bolt in his teeth, and still using it as a weapon, feels lackluster. Having ninjas in a bar fight is just lame, and the bar set has such a big floor, it doesn’ even look remotely like a real hole in the wall bar. The rapey sexual threat agains the female lead (Robin Stille) is problematic for many reasons, and also just lazy storytelling. Certainly American Ninja 5 must redeem the franchise, right? It’s not part of this Blu-ray release.

The American Ninja 4 Blu-ray has some moments, like colored ninja squads training on a cliffside. Overall it is the most hazy picture. The behind the scenes spot is fine, and “The Cobra Strikes” video features clips from all four films, reminding you how good this franchise began.

So definitely stick with the first two American Ninjas and these Blu-rays are a great way to revisit the films looking great with some behind the scenes extras.