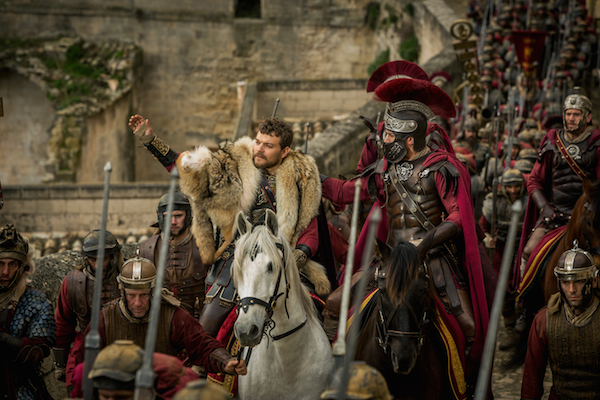 We sat in a roundtable with Kebbell and Asbaek to discuss the making of the film. Kebbell took us through the climactic chariot race scene, a must in any adaptation of Ben-Hur. Asbaek took us through another intense scene where an assassination attempt is made on Pontius Pilate. Ben-Hur is now in theaters.

Did the chariot race turn out as you expected from filming it?

Toby Kebbell: Way more impressive than I could imagine. In addition, all the extra pieces, Pilou’s part and everybody running around and having their roles. But there was one shot that we had on a pole cam that came out from the front of our chariots. You could see all four horses on me and Jack going around full speed. I was like, “This is incredible. People are going to know. We’re not going to have to explain it wasn’t stunt guys, it wasn’t CGI, it was us.” And it’s no in the film.

Pilou Asbaek: It’s always so frustrating when you watch the film. You have an idea that you’ve seen all the different angles. Then you go, “Why did they not bring that in? That’s the coolest shot. I look like a badass.”

TK: They showed it to us and explained it to us. Actually when you watch it back we’re going [squinting] and we’re covered in dust so you basically can’t see that it’s us anyway.

PA: I haven’t seen the film, so I can’t talk about anything except pizza, pasta and Rome.

PA: Did I introduce you to the calzone?

TK: We both knew the calzone.

TK: I remember one of the nights when we were in Matera and Rodrigo was there. He was on a diet because it was the big scene of Jesus on the cross. So he didn’t to eat. We were eating pizza and drinking wine and he was just sitting with a little salad. He was very Jesus though, wasn’t he? Came in, he was very calming and loving.

PA: When he turned water into wine, I was like holy f***. Dude, that’s method acting.

TK: Handsome and able to be the best party guest.

How long were you in Rome?

TK: I find it harder what you did. When you go to a job and you’re working all the time, it’s like being a work. When you have to sit around, like we would go for dinner with Pilou’s like, “What did you do today?”

TK: It is harder that way. So we had a good time.

How much of the original film did you reference?

TK: That was what was beautiful for me. I was told this original film, like I called my mom and she’s like, “Oh, the original’s incredible.” Until I found out that the original was a bestselling book. Then the other original was a long running play and then a silent movie and then a TV series and then Heston’s “original” movie. They did incredibly well. They wouldn’t have won Oscars otherwise. I should’ve been smart and realized they won 11 Oscars before signing up for the film. My memory of that, stupidly, now I think about it, now I’ve rewatched it, was Easter with my mom being told how handsome Charlton Heston was. I didn’t reference it, no, otherwise I’d be nominated for an Oscar.

Did you learn to actually drive a chariot?

TK: Yeah, it’s all real. That was the benefit of cameras nowadays. They’re so light, we could do it all at full speed so we didn’t have to speed anything up. That’s not to say they couldn’t ride those chariots for real. I’m sure they could but the camera was not capable of catching it. In the early days of doing film, they were like, “Can you run slower?” Now technology, digital, I had a camera on the chariot in various different places. I had a camera on my head. So we did it all for real.

PA: I remember the first day I saw the chariots coming out of the gates, that was incredible. That wasn’t acting. That was just a guy enjoying among 500 extras the most crazy show I have ever seen.

How does it feel to control these four magnificent horses?

TK: Feels like an illusion. You have to convince the horses and yourself by saying, “Yee-ah” or “Whoa” that you’ve got any control. It’s quite phenomenal. The first day we were taught, “Okay, you guys have a break but however, a break on sand and sawdust will make your chariot bounce and here’s the issue.” So they drag us behind the quad and we slam on the break and it makes us go pop. Of course there’s a bar out the front and if that bar touches the floor, you’re done. That was lesson number one was how hard you can actually break. We didn’t use the break really. You set up your horses so you have your very intelligent horse that can hear your voice always because he’s running the full race. He doesn’t really get to break stride when he goes around the corner. You’ve got your laziest horse on the inside because he doesn’t want to run, so he’s going to break stride way before you even say whoa, and he influences the next horse because then next horse isn’t as bright as George, my outside horse. You begin to split your strength from four horses to you and a horse, you and two horses and then you and three horses versus George. It was me, three horses vs. George so eventually I won and we turned the corner.

How intense was the assassination attempt on Pontius Pilate?

PA: That was very intense. The reason why it was very intense was I am no as good a horse rider as Toby and I don’t have the same control over a horse. I respect them, I like them but I’m a little bitt more afraid of them. That’s something that i have to work with. But when we were doing the scene in Matera, that was one of the first days were shooting, it was my first American film. So we would shoot those scenes the first couple of days and I was relying on Toby because Toby had to pull me down. I remember one of the extras who had to take the horse so he wouldn’t land on top of us, pulled the horse a little too late.

TK: He’s a stunt guy extra, so I grab Pilou and we roll backwards. I come off, I kick my leg over and I slide between the horse and Pilou comes off this way. But he took the horse and as I took Pilou off, the horse started to go that way so I flipped and we were on a hill in Matera like this.

PA: It was pretty hardcore, man.

TK: It was. We do a lot. You go through a lot but there’s a lot of people who get no thanks for all their hard work. They do incredible things. We get the privilege of coming to talk about it.