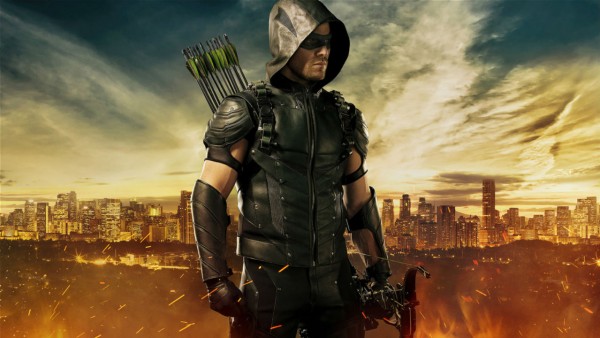 The Team Arrow support cast is sorely missed in this new Oliver-centric episode. Where are Roy Harper, Black Canary, Spartan (John Diggle), Lyla & Sara, or Malcolm Merlin? Well we know Black Canary is dead because the city just erected a statue of her to honor her sacrifice. Though Executive producer Wendy Mericle says that Laurel Lance will definitely be back. How, since she died, is a mystery. And as for Roy Harper, he’s not dead, so hopefully he’ll return as well. And Diggle is off with the military somewhere, while Lyla and Sara are probably holed up at ARGUS. But my point is that Green Arrow is operating in the field alone, and needs help, because he’s so vulnerable, and so boring. Felicity wants him to put together a new team, made up of young Vigilantes. These guys/gal are already on the streets trying to do good. Inspired by the antics of The Green Arrow. But Ollie is still holding out hope that Diggle and Thea will return to team Arrow. (As are we) But that doesn’t look like it’s happening any time soon.

Oliver may be alone when he’s out in the field as The Green Arrow, but he does have Felicity operating as Overwatch. And when he’s mayor, he has Thea by his side as a Mayoral Assistant. And remember how happy Quentin Lance was in the finale? He was leaving town with Felicity’s Mom, his new love. Well he’s back, he’s drunk and he’s been dumped. But Oliver talks him into to pulling things back together, to honor Laurel, and to help him with the corrupt police department. Then, at the ceremony to unveil the Black Canary statue, the new bad guy in town, Tobias Church, kidnaps Oliver Queen. Church wants to use the new Mayor as bait to draw out The Green Arrow. Of course he doesn’t know that Oliver is the Green Arrow.

Quentin Lance talks Thea into suiting up again as Speedy to help free Oliver. But Oliver doesn’t really need the help. He learned a few things in Russia, like how to dislocate his thumbs to slip out of constraints and free himself. (Russia is the new location for the infamous Ollie Flashback sequences) Also, Oliver has gone back to killing. He snaps the neck of the corrupt Cop that was  guarding/torturing him, in front of Speedy. Then, as she helps him escape, he kills several of Church’s men. And that’s the straw that breaks the camel’s back. Thea didn’t want to be Speedy again. And now, because of Oliver’s new ‘kill or be killed’ attitude, she never wants to don the suit again. Killing is so season one, and Thea wants no part of it. (Roy should come back as speedy! I’m just saying…)

Lance talks Oliver into accepting help from the four Police Officers that Quentin trusts. So, with their help, The Green Arrow goes back to free the other hostages that Church has locked away. The operation goes down, and it gets a bit dicey, but they free the hostages. Church gets away in a helicopter. But Oliver uses a tether arrow to hitch a ride. Then Church and Green Arrow fight in the copter. And ‘Oh No,’ Oliver gets pushed out and falls with no help in sight. (Where’s Supergirl when you need her?)  But The Green Arrow has it covered. He fires an arrow that becomes a parachute. You heard me right. He has a parachute arrow. And that looked as ridiculous as it sounds.

Long story short: Oliver has finally decided to move forward. As Mayor, Oliver honors the four officers who helped The Green Arrow against Tobias Church, making them part of a new anti-crime task force. And he tells Felicity that he will indeed seek out the new Vigilantes and put together a new Team Arrow. He also has a video chat with Diggle, who is in the army at some unknown location. And Diggle also believes that Oliver should seek out a new team, giving him his blessing. It’s a sad moment, because we all want Diggle to come back. And I have a feeling that he will, soon enough. And speaking of moving forward; we find out that Felicity has a new boyfriend that Oliver apparently knows nothing about.  OUCH! That is so un-cool Felicity!!!!

LAST WORDS: Curtis goes on the hunt for a Vigilante named Wild Dog. He doesn’t find him. But Curtis does get mugged. And that beat-down motivates Curtis. Now he wants to join Team Arrow as a trainee. So maybe Curtis will become Mister Terrific this season. That’s the tech superhero his character becomes in the comic books… And how does Diggle come back?  Does it have something to do with The Flash? Barry went back in time and screwed up the timeline, and that could alter things in the Arrow-verse as well.  Maybe even bring back a certain Canary.  But we’ll have to wait and see….   And oh yeah,  a new villainous dark archer shows up in town. What does he want? STAY TUNED!!!!

NOTE TO PRODUCERS: Why does Oliver fight evil archers, while Barry fights evil speedsters? It’s getting to be a bit cliché… And the ratings for this Arrow premiere are way low. Maybe it’s because you’ve taken away so much of what we like about the show (Diggle,Lyla, Sara,Roy, Black Canary).  And you keep doing flashbacks! This is our fifth  year of seeing flashbacks that we care nothing about.  They slow down the story and take up time that could be better served on story.  Everyone knows that Oliver isn’t going to die in a flashback, so the supposed dangerous situations you place him in are not suspenseful at all. 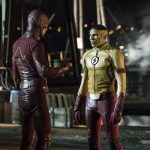 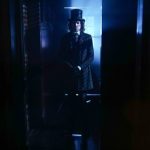