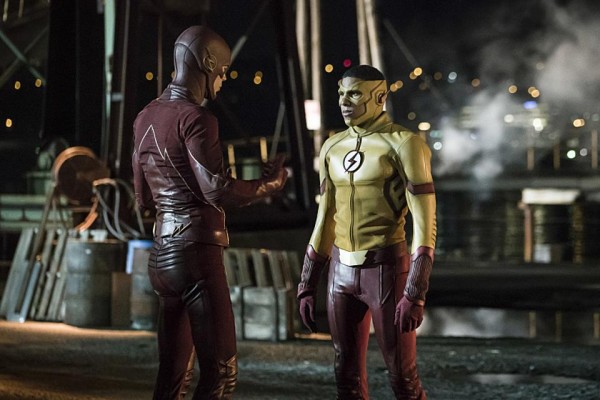 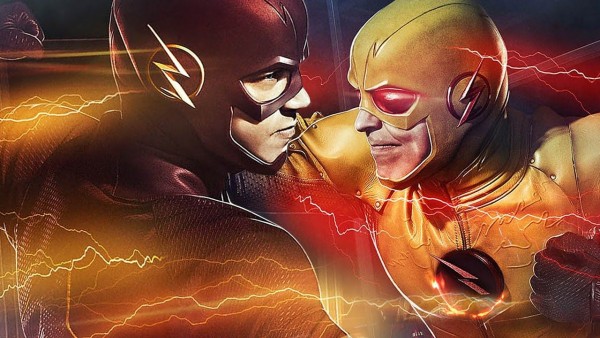 “Oh no you didn’t Barry Allen.” Instead of dealing with the tragedy of his Father’s death, he goes back in time to change the timeline.  He saves his Mother from the Reverse Flash, because that’s where all the trouble started. But does changing the timeline make Barry the villain of this story? Yes it does. Barry chooses to create his own Happy Ending, disregarding what could happen to everyone else in the world. And that’s the opposite of what a hero does. It’s a fun episode though. And we get to see Barry discover the error of his ways, and do the right thing. BUT! There are consequences.

The alternate timeline that Barry creates is washed away by the end of the hour, but that doesn’t re-set everything. Barry dallies too long in the alternate timeline, about three months we’re told. So by the time thing begins to implode and Barry wants to set things back the way they were, he’s powered-down, and has to trust Eobard Thawne.  And good old Eobard is the Reverse Flash. He hates Barry, and was erased from existence in season one. So why in the world would he re-set everything, eliminating himself? So, at the end of Flashpoint, Barry is back in a recognizable version of his timeline. But it’s apparent that everything isn’t exactly as it was. A dilemma he’ll just have to deal with.

In the Flashpoint Universe, Barry is happy. He lives with his Mother and Father, who are alive and happily married. And he just summoned up enough courage to ask Iris out on a date. Since they didn’t grow up together in this universe, they barely knew each other. But Iris says ‘yes’ and that relationship seems to be on the right track. Barry still has his speed, but he’s not The Flash, Wally West is. Seems his car got hit by lightening while he was testing a new super fuel, and he tapped into the Speed Force. And while the cocky and immature Wally calls himself The Flash, both Iris and Barry eventually call him Kid Flash. (His character from the comics.)

But things in the Flashpoint Universe aren’t all good things. Barry has Eobard Thawne trapped in a cell that prevents him from using his super speed. And he warns Barry that he’ll eventually forget everything from the original timeline, including the fact that he’s The Flash. Which means he’ll lose his super speed. But Barry dismisses the warnings until his treasured memories begin to fade away. And Joe West, his beloved surrogate Dad, is a bitter drunk in this reality. Joe is estranged from both Wally and Iris, he has no feelings for Barry, and he’s on the verge of being fired. Cisco Ramon is a heartless Billionaire. And Caitlyn Snow isn’t a scientist, she’s an Ophthalmologist. Which isn’t a bad thing, but it is different. And Barry’s parents want him to grow up and move out of the house.

The Flash and Kid Flash team up to fight the bad guy. His name is Edward Clariss, and he’s an evil speedster named ‘The Rival’. Barry has a plan, but Wally, being young and cocky, forsakes the plan to go after The Rival mano-et-mano. He ends up impaled and near death, leaving Barry to face The Rival alone. But Barry is forgetting how to be The Flash. Luckily, Iris speaks to him via his headset, and helps him remember. Barry deconstructs the two tornados that the Rival whipped up, and with Joe’s help, The Rival is defeated. But Wally West is dying! So to re-set the timeline back to they way it was, Barry has to take the Reverse Flash back in time and let him kill his Mom. That’s a bummer decision for a loving son to make.

Barry and Iris go to say goodbye to Barry’s parents, who will both be dead when the timeline re-sets. They don’t tell them what’s happening, of course, but his Mother knows something bad is about to happen. Then Barry and Iris go release the Reverse Flash so that Barry can take him back in time. But Barry collapses, his powers gone. So Eobard Thawne gets to be the hero. Well, sort of. He goes back in time and kills Barry’s Mom, nothing heroic about that. But it does re-set the timeline. And The Reverse Flash delivers Barry back to Joe’s house, where this journey began at the end of last season. Both Joe and Wally are home, and they are their normal selves, which is a relief. But when Barry mentions Iris, we find out that father and daughter are estranged. Which signifies that there are still changes to the timeline that we have yet to discover.

LAST WORDS: During Flashpoint, Barry picks up the drunken and passed out Joe West. He showers him, brushes his teeth, and changes him so he doesn’t get fired. It was all at super speed, but still, that’s awkward… And Wally is Kid Flash for one episode, but will he don the uniform again anytime soon? Let’s hope so, but with a costume upgrade… There was a new Police Captain in the Flashpoint Universe and I hope he doesn’t replace David Singh.  Captan Singh’s storyline was never fully told. There was supposed to be a wedding… And in Barry’s new reality, we see this universe’s Edward Clariss, aka The Rival. And someone named ALCHEMY is apparently recruiting him.  Is Alchemy the new big bad?   STAY TUNED!!!!!!