At the end of last week’s episode, Lyla showed up and asked Oliver to break Diggle out of his military prison. Diggle was framed for crimes he didn’t commit. But he’s still feeling guilty about his brother Andy’s death, so he’s willing to take the punishment. But Lyla’s not ready to be a single Mom just yet. So Lyla and Oliver come up with a plan to spring Diggle, even if he doesn’t want to be sprung. And what does Felicity think? Well she isn’t on board, so they just move ahead without her. What’s with all the bumping heads y’all? Can’t we all just get along? I miss the Arrow Team camaraderie: Green Arrow, Spartan, Overwatch, Black Canary, Speedy, and Arsenal. It was them against the world. But where did all the teamwork go? Even the new guys can’t seem to pull it together to stop a simple heist. Artemis, Ragman, Wild Dog, and Mister Terrific can’t even spell the word teamwork.

Oliver has to help the new team stop a simple heist, because they can’t seem to follow a simple plan. And Ragman, the most powerful newbie is missing in action. He can’t face Felicity, now that he knows that she was responsible for nuking his entire town. Damien Darhk actually fired the missile, but Felicity diverted it to where it would do the least harm. And unfortunately, the nuke took out Havenrock, Ragman’s hometown, killing his friends and entire family. That’s a lot to process! But by episode’s end, Ragman rejoins the team, realizing that Felicity had to make that impossible choice. And while neither are happy about what happened, they are both trying to find a way to live with it.

What about my man Diggle? Well, he’s still in prison, and he’s still kicking himself. If he had believed what Oliver was trying to tell him about his brother Andy, Black Canary would still be alive. And when Andy threatened Lyla and Sara, Diggle ended him. He was protecting his family, but Diggle still feels guilty about killing his brother. So it’s up to Oliver and Lyla to pull him out of his funk, and liberate him. And while it’s easier said than done, Lyla and Oliver are up to the Challenge. Lyla gets Oliver into the prison. And then, using his Ninja-like skills, Oliver is able to make it to John Diggle’s cell without being seen. But Diggle isn’t there! What,What!  Now Oliver has to improvise, and time is running out. He ties up a guard, allowing him to be found. Then the prison goes on lock-down and all prisoners are brought back to their cells. Diggle and Oliver reunite, and Oliver talks him into taking his life back. Then they make their escape. It involves underground tunnels, and a cool air rescue. They must have seen Christopher Nolan’s ‘The Dark Knight.’

Meanwhile, Tobias Church is up to no good. He breaks into the police evidence facility and steals a lot of nasty weapons. Then he goes to break one of his men out of police custody. It’s the dude that pulled off the heist that Green Arrow helped the newbies catch. But Felicity sends the new team, minus Oliver, after Church. She orders them not to die, but that’s a command they might not be able to obey. Church is a really bad dude. And he fights dirty. The new team is no match for him. Curtis, aka Mister Terrific, gets a knife in the back. And Wild Dog gets a beat-down from Church, and ends up a hostage. And Church likes to torture his hostages. So when next we see Wild Dog, he’s bloody and beaten up, and about to take another Taser shot to the gut. Ouch!

Oliver is back! He sets Diggle and Lyla up in a safe house, then goes to the Arrow Cave to find out what’s been going on. He’s not happy. Oliver vows to find Wild Dog, if he’s alive, and free him. But Oliver has no idea how he’s going to do it. STAY TUNED!!!

LAST WORDS: Curtis survives the knife attack. But how in the world is he going to explain it to his husband. And when is Curtis going to develop some high tech crime fighting gadgets? Because right now he’s the weakest member of the team, though he does have the coolest mask… And when will we see how Flashpoint changed things in the Arrow-verse? We already know that Diggle has a son instead of a daughter. And the producers have already confirmed a Laurel Lance, aka Black Canary, return. How is that going to work? But looking on the bright side; maybe her return will inspire Quentin Lance to give up drinking….. 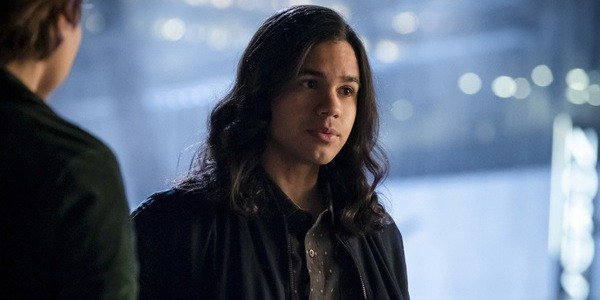 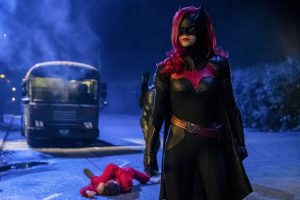