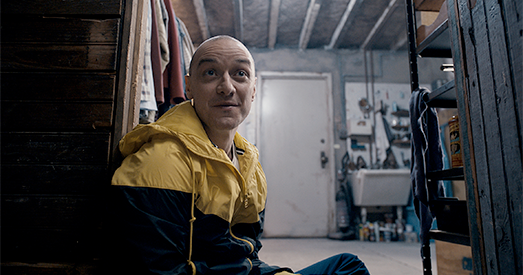 AFI Fest showed M. Night Shyamalan’s new movie Split which will not be in theaters until January 2017. After the film, Shyamalan revealed that the script came from a deleted portion of Unbreakable.

“This was a character that was in the original screenplay of Unbreakable 15 years ago,” Shyamalan said. “I couldn’t get it right. It was too many characters. It was all there. A lot of the scenes I had written 15 years ago.”

James McAvoy plays a kidnapper with multiple personalities, so it’s easy to see how that would be too much for everything else that was already going on in Unbreakable.

Betty Buckley plays his psychiatrist, and she was almost cast in Shyamalan’s prvious film The Visit. However, The Visit required the Nana character (Deanna Dunagan) to appear naked and Buckley declined.

“Betty refused to,” Shyamalan shared. “I had cast her in The Visit which I was considering, I said, ‘Would you have gotten naked for me in The Visit?’ She said she wouldn’t do it.”

Introducing the film, Shyamalan discussed the ways Split challenged him as a filmmaker, describing “how difficult it is sometimes to entertain and still do something truthful where you’re expressing something that is truly you. All of your fears and your arrogance and your love and hopes, all that stuff that is why we get into art to begin with, but still that desire to entertain. Can you do that? Sometimes you feel tight and you want to be loose. How do you get loose? How do we get to enjoy the process, the mechanics of it and renew yourself and celebrate yourself at the same time as you’re doing something for others? It’s really a wonderfully complicated, amazing experience.”

Like The Visit, Split is a low budget Blumhouse movie, which forced Shyamalan to be more creative than ever before. “For me, recently, I’ve been trying to do things differently,” Shyamalan said. “These last two movies I made were much smaller, a more intimate scale and that has created a certain kind of limitations and urgency that makes me think differently and act in a certain way and reminds me of my film school kind of days. You just think differently when I just don’t have the money to do that. We only have this many days.”

Shyamalan also reached out to new talent to join his team of filmmakers. “I saw the first season of True Detective and I just thought the production design and the art direction was so beautiful so I hired Mara LaPere-Schloop who is the art director. She is the production designer of Split and she brought all this new energy. I saw a documentary on HBO where the music was incredibly haunting. It was The Jinx and West Thordson who did the music, I hired him, and this is his first movie that he’s composed. Then I saw It Follows and the camerawork I thought was incredible. I asked the cinematographer to shoot it so Mike Gioulakis is the cinematographer. All these incredible new artists are igniting me and making me think and challenging and bringing new points of view. It’s disarming. You get to be a student all over again. You learn your weaknesses and you build new muscles.”