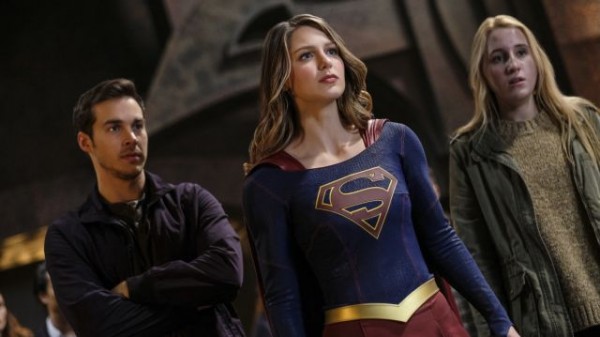 Supergirl came back Monday night and we’re glad to see her. And in case you didn’t hear, the show has already been picked up for season three, so she’ll be back next fall too. This is a big episode for the series because Supergirl and the gang travel to another planet for the first time. The bad news is that it’s a planet with a red sun, so Supergirl loses her powers. Kara and Mon-el travel through a star-gate and get teleported to Slaver’s Moon, a planet of alien slave traders, to save humans who have been kidnapped and put on the auction block. Oh, and Mon-el is powerless too. And if you’re waiting to hear their elaborate rescue plan, don’t hold your breath, they don’t have one. They pretty much charge ahead, consequences be damned. But Supergirl is a hero, so they’ve got that going for them. And for this show, heroic grit and gumption are always enough, no matter how dire the situation appears to be. But director and super-fan, Kevin Smith, keeps everything fun. So it’s an entertaining hour of television. Though I do have to give him grief for shoe-horning his daughter into the episode as a wayward teen with Mommy issues. Her plight was supposed to evoke a whisper of real emotion, but only managed to scream nepotism.

Winn had a great character arch in this episode, and I’m glad he finally got another chance to shine. In the beginning, we see Winn helping The Guardian, who is secretly Jimmy Olson. He gets beaten up by a thug and almost killed, which leaves him shaken and scared. And that is understandable! So he quits his side-kick gig and retreats to his safe tech-guy world, hiding behind his computer. But when Supergirl and Mon-el go missing, and the D.E.O. locates them on Slaver’s Moon, Winn is pressed into service as a field agent. But he declines to go on the rescue mission at first, admitting to Alex that he’s scared. But she talks him into facing his fear, and he does man-up. So Winn makes the leap, with Alex and company, to Slaver’s Moon. And while on this dangerous mission, Winn faces off against an alien thug, in a situation similar to the one that resulted in his earlier beat-down. But this time Winn finds the courage to fight back, and triumphs, finding his confidence. And when Winn gets back to earth, he re-joins team Guardian, as a hero.

Alex and Maggie sitting in a tree, k-i-s-s-i-n-g. A little too much I think. Alex is so ga-ga over Maggie she can’t even do her job. When Kara disappears, Alex blames herself, and rightfully so. Alex was too love-struck to go along with Kara and help with the investigation. And then what does she do when Kara goes missing? She takes it out on Maggie, blaming her. What what! I just don’t like how weak and reactionary Alex has become. Though in Alex’s defense, Maggie does just show up at the super-secret D.E.O. during a crisis, because Alex hasn’t returned a phone call.   That is a little clingy. But by episode’s end, the two are back to normal and everything’s forgiven. Oh, and by the way, Maggie reveals that she knows that Kara is Supergirl. And it wasn’t that hard to figure out, Maggie is a detective after all.   So now pretty much everyone on the show knows Supergirl’s secret identity.

And speaking of Supergirl and Mon-el, her next love-interest, they end up on Slaver’s Moon. And they bicker, because that’s what you do under a red sun I’m assuming. They are powerless, but Supergirl still wants to storm the alien fortress and save the hostages, while Mon-el wants to save himself. His superhero name should be ‘Self-Preservation Man’. But they move forward with Supergirl’s plan, which is to surrender so they will be taken to the hostages. And that works rather well. But once caged with the rest of the Earth folk, it’s clear that they don’t have any idea how to escape or get back home. In a cool nod to the big crossover episode, a Dominator buys the humans, probably intent on some sort of domination. But before he/she can take possession of the slaves, Supergirl stands between the guards and the hostages, protecting them.

Then Supergirl gets tased by the guard’s energy weapon, and goes down. Remember, she has no powers. It happens a couple of times. But she keeps getting up.  Supergirl has heroic grit and gumption, even powerless.  And that inspires the cowering humans, who finally fight back against their captors, and they all make their escape. Then Mon-el is almost shot dead. Or is he? Apparently, he’s in no real danger on Slaver’s Moon.  The aliens won’t harm him. In fact, it’s almost like they bow to him, like he’s royalty or something. I guess we’ll find out what that means in a future episode. Meanwhile,  Supergirl and the escapees run into Alex and the rescuers, and they all head back to the star-gate. And they make it back to Earth with Winn’s help. He programmed the star-gate to take them home. And he fought off an attacker, and his personal demons.

Back on Earth, Mon-el pays Kara a visit at her apartment. And he tells her that he wants to train to be a superhero. But is he doing it for the right reasons? He says he wants to help people, but his motives could be selfish. He has a crush on Kara and he could be trying to be noble because he knows she’ll never fall for a cowardly whiner. And I say that because he doesn’t come clean about whatever secret he’s hiding. If he were really being sincere he’d put all his cards on the table. And back on Slaver’s moon, the masked alien’s tracking Mon-el show up and find out that he’s hiding on earth. So it’s only a matter of time before they show up in National City looking for him. STAY TUNED!!!!

LAST WORDS: Roulette makes an unnecessary cameo appearance on Slaver’s Moon, wearing that same red dress. Apparently, she doesn’t have a change of clothes, or a real purpose. Because the story could have been told without her… And I’m not a fan of The Guardian. The show has so many superheroes on it already there’s no room for his exploits. The show already has Supergirl, Martian Manhunter, Mon-el, and maybe Miss Martian, and possibly Superman. So do we really need Jimmy Olsen too? And in the comics, he was never The Guardian. His new crime-fighting persona feels like a failed attempt by the producers to justify that character’s continued existence on the show. 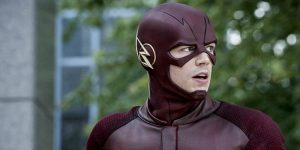 THE FLASH Recap: “Dead or Alive” 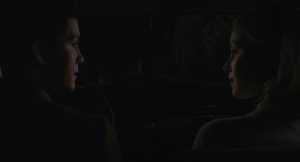 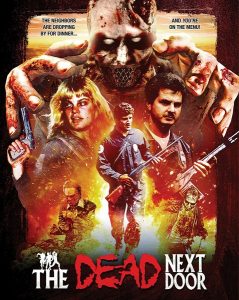 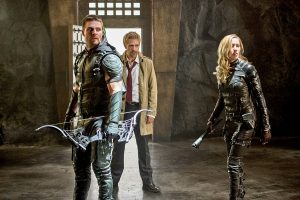 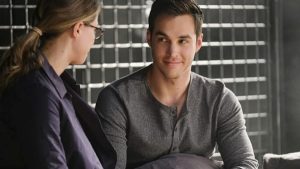