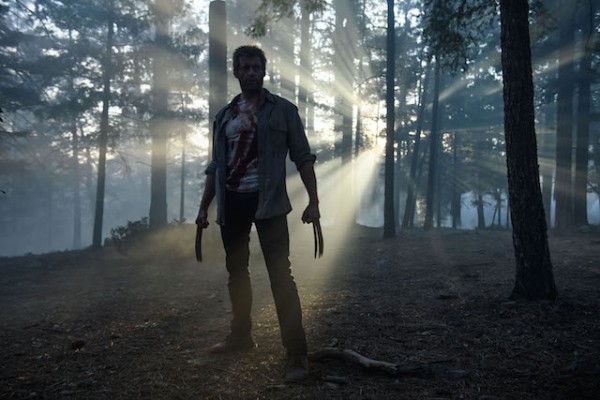 Wolverine is back in a movie that’s not for kids. Logan is Rated R, but the R-rating is not a gimmick. Logan is truly a grown up movie that will pay off fans who grew up with Wolverine and X-men movies, but also just reward audiences who are at a stage where they too are reflecting on their lives, with or without adamantium claws.

In 2029, mutants are old news. There haven’t been any new mutants born since the last generation at Xavier (Patrick Stewart)’s school, so it’s a Children of Men for mutants. Logan (Hugh Jackman) is just trying to keep Xavier safe and secluded when Gabriela (Elizabeth Rodriguez) comes looking for him. She pays him to take her and Laura (Dafne Keen) across the border, but Laura was part of a mutant experiment. Donald Pierce (Boyd Holbrook)’s men want their experiment back so Logan has to take Xavier and Laura on the road.

Fans have been waiting 17 years, really for decades since reading the comics, to see the full impact of Wolverine on screen. Previous movies kept the stabbing out of frame, and many were artfully done, but the fights in Logan are the berserk scenes they’ve been waiting for. You not only see graphic kill shots, but you see the tips of the claws come out the other side.

But when the villains commit violence on innocents, it hurts more too. Perhaps we’ve grown to accept collateral damage in action movies, despite any outcry over superhero destruction. Making the battle more than just people falling down gives it the weight and stakes that have been missing from many movies.

Best of all, director James Mangold gives Logan permission to not just be set piece after set piece. The action is the best of the series, but some of the best parts are the moments they find during long stretches on the road where characters are forced to deal with each other. Logan is about a world that’s tired of mutants. How do you care for a convalescent with mutant telepathy that enables him to resist? X-Men comics now exist in this world but if you’ve actually lived it, how would you feel about publishers turning your life into children’s stories?

There’s even a whole subplot where Logan, Charles and Laura stay with a family of farmers for a night and have a Nowhere to Run adventure with the locals. The Van Damme movie wasn’t the first to do that “loner helps locals fight corrupt city folks” either but it’s a quaint little story for a superhero movie. Really, it’s the western archetype of “mysterious stranger saves the farm but can’t stay” and it’s no secret Mangold was making a western. If the dusty desert locations didn’t give it away, other Western homages are specific and overt, and well suited for this take on a superhero. Logan remains a loner, a reluctant hero at best and he still won’t be happy about helping.

After the farm interlude, Logan spends the entire third act in a white undershirt. That’s the Wolverine we really want to see. This is Jackman’s best performance, his most animalistic yet full of regret and reservations.

If this is the last time Jackman plays Wolverine, it is certainly his best movie. Famous last words though, maybe he’ll want to explore the freedom the R rating gave him even more, or at least play a part in other X-men’s movies the way Stewart did for him. Logan would be hard to top though, so if Jackman’s tenure as Wolverine has to end here, he’s going out on top.