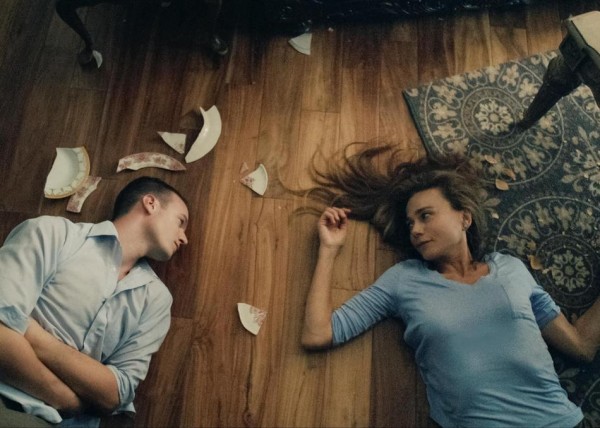 A Critically Endangered Species premiered at the SXSW Film Festival. The first film from writer/directors Magdalena Zyzak and Zachary Colter stars Lena Olin as Maya Dardel, a poet and novelist who announces her plans for suicide on NPR. Looking for an executor of her will and beneficiary of her estate, Maya auditions men whom she manipulates sexually and intellectually.

Alexander Koch, Nathan Keyes, Chris Voss and Jordan Gavaris play the men, all of whom have to go down on Maya as part of their interview, and some take it further. We met the filmmakers and all the cast, save for Gavaris, in Austin to discuss their provocative film.

NR: Would you continue the deep conversations that are happening in the film between takes?

ZC: Absolutely. I would say lunch was quite scintillating. I say that with two grains of salt.

NR: Lena, what did you think of this character?

LO: She’s so complex and there’s so much to her. I think the sign that you’re drawn into a project when you read a script is that you don’t have opinions. You’re sort of drawn into it and you almost start the process that then continues as you start working and shooting the film, when you read the script. You have little visions and I don’t want to make it sound too pompous but you have sort of images and you keep on thinking and you keep on seeing yourself and having ideas. You stop thinking about the character from the outside. I think that’s what happened when I read the script. I started envisioning myself living the life of this character. Then I was sent a lot of tapes or links to strong feminists and strong writers that I know were role models when they wrote the script. That’s when I started thinking, “Wow, these women really have an edge and toughness about them when they talk. They have a confidence that certainly in America is very unusual where women are very apologetic when they speak, starting from a young age. We are very sort of apologetic with the way we speak. That’s certainly not true with Maya or any of these strong female writers.

NR: What was the inspiration for this type of character and intellectual/philosophical story?

MZ: We looked at directors such as Camille Paglia and Susan Sontag, women whose views are not necessarily orthodox and not necessarily aligned with the views of their eras. We’re interested in women who in a narrative intelligence sort of comments on herself as she proceeds.

ZC: We’re interested also in anti-victim politics. That’s what Maya’s all about. She says so in the film, she doesn’t want to ever be cast as a victim. She wants to have raw power, she says.

MZ: This is basically someone whose mind is so superior that she’s indomitable. None of these boys can do anything to her because she is in a different category entirely, because of her intelligence, because of her experience.

ZC: Or so it appears. That’s sort of the problem that is set up. They do manage to challenge her in various ways.

MZ: In a sense it’s a game. It is serious and it is unserious both at the same time.

NR: I’ve never seen a reaction like Maya’s in a rape scene.

ZC: There are so many way for that to go very wrong, I think.

NR: Did you know exactly how to play it, Lena?

LO: One of the joys with this I think for all of us actors is that it was very clear the words, because we’re dealing with writers, directors, the words are so carefully picked and they’re so accurate. So the words are easy to understand. When you talk about this being an intellectual film, and you guys are definitely extremely intellectual people, here’s also the human side to you guys or a very real. I feel like I’m on the sports field too which I think created the joy of work. If they were just brave in the way they are and not also fun and crazy and all of those things, that helped us on set to have the joy. You think it up and we’re like the clowns that have to get in. If it’s just cerebral, there’s a disconnection so you feel like you’re not connected to yourself and how could we work? I certainly loved that aspect of it. The intellectual level is very high on this project but also the fact that I also felt like I was on a schoolyard helped me. I think it helped us all.

MZ: That was the take we used, the first take. I don’t want to sound glib, but is the playfulness of the situation and the fact that she has authored the situation that sort of takes it out from the whole rape paradigm. It was definitely difficult. Let me begin with the whole film is based on a loose retelling of an Artemis myth. So basically if Actaeon sees Artemis naked he’s going to have to die. In a sense in the film Maya takes her pleasure from the boys but never undresses because she doesn’t want to give up her power. In the scene, Paul is trying to actually get some power back from Maya. What was really important was to retain Maya’s authority in the scene. We purposefully shot it from the perspective of her face s so that you don’t see any pornographic or sensationalistic echoes. We wanted to make sure that her dignity is intact because she is ultimately the authority in the film and she cannot be hurt by an act like that.

ZC: We’re playing with cliches a little bit here because there are a lot of cliches floating around. The contemporary moment is very much about gender politics and victim politics and these kind of things. One of these things that we were eager to try to figure out is: Is there a way that a woman can be so powerful that she can win in that experience? How can a woman take the upper hand in that experience, short of pulling out a gun.

MZ: I don’t mean to diminish people’s experiences, but in the end reality is narrative. They can narrativize their experience. A lot of experiences become what they are retroactively.

NR: For the guys, what was it like to go toe to toe with Lena in those intense scenes?

CV: This was a very intimidating experience going into it for me. But as soon as I got there, Lena’s such a warm and open person. She immediately made me feel comfortable on set. I think I was the last of the guys to get cast so I was the last to film. At that point, I felt like I was coming into an already established set but my anxieties about that were quickly relieved. The set itself, everybody who worked on it was very close, very welcoming.

NK: It was. It was like a little family up on the mountain. We were secluded. I had the privilege of being there for most of the time. Getting to work with Lena was just a dream come true. So giving, so talented and just like there.

AK: I remember, I think it was the first day we shot. Lena was just sitting on the couch and she had this eye makeup on, just kind of leaning back. I was like, “Okay, this is really so weird and bizarre in the scene. Let’s just go with this.”

MZ: The way we shot it, we tried to in a sense recreate the events in the film so all of the boys came one by one, the same way they come for an interview in the film.

NR: Did you get to invent your own philosophy and poetry for the film?

NR: Was that the Campbell’s soup poem?

MZ: I have to say it’s one of my favorites still.

ZC: That was the irony. I wrote this poem poorly on purpose and all my friends are like, “This is better than your work.” Everyone loves that poem.

ZC: Well, don’t say that. I know a couple people that are going to be very angry with you for that comment. Okay, I’ll take it.

NR: Did you know characters like this, in academia, college or acting school?

ZC: We did. We both come out of the MFA system. Magdalena got an MFA at Columbia and I went to Iowa Writers Workshop. In a sense, we based these guys on people that we used to be in classes with because it’s very much about that culture. All these characters are recent MFA graduate students. There’s some reference to that in the film. Kind of tried to, without creating stereotypes, try to pick fours guys who represent maybe the east, west, orth and south of the current young 20something writer.