The new Power Rangers goes for more sincere teen drama versus the camp melodrama of the original series. It’s sort of John Hughes with super powers as a detention “Breakfast Club” discovers the magical coins that eventually turn them into Power Rangers. 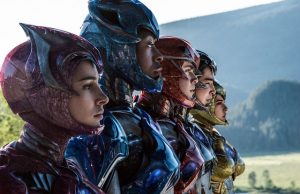 Jason (Dacre Montgomery) is a mild delinquent who gets in trouble for a prank bordering on vandalism (and animal cruelty). His head and heart are in the right place because he immediately treats Billy (RJ Cyler) with respect when bullies make fun of Billy for being on the spectrum. Kimberly (Naomi Scott) is a former cheerleader with a cell phone photo scandal. Zack (Ludi Lin) hangs out in the mountains alone to escape the responsibility of caring for his ailing mother. Trini (Becky G) is another loner with a disapproving family.

Power Rangers really takes its time to build up the characters. It could speed up a tad, but it’s worth it. These are real teenagers. They’re reckless to a point but ultimately worried about their own well being, and have serious questions about what they’re being asked to do. 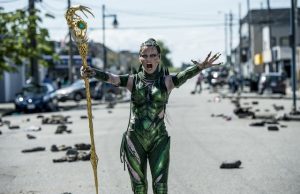 Then Bryan Cranston emotes like Walter White when he’s introduced in Cenozoic times naked and painted white, and then as Zordon’s face behind a wall. Elizabeth Banks is magnificent with her body language and expressive face even behind prosthetic makeup as Rita Repulsa.

Since this is the origin story, there’s a great training montage. It captures the sense of playful discovery like when Peter Parker first tried out his powers. It’s got some non morphin action too, with two car chases before they even get super powers. 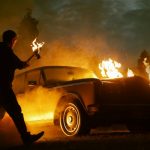 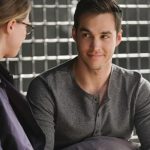