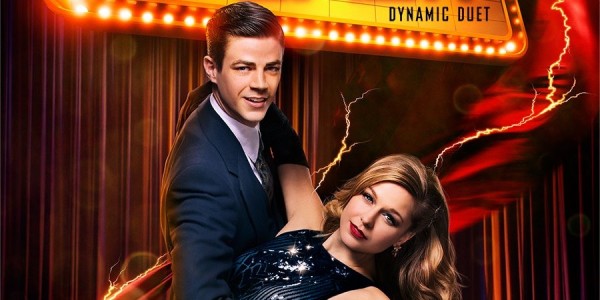 This musical rendition of The Flash was actually pretty good. I was really glad that the episode moved the story along and tied up some storylines that could have dragged on to the season finale. And the Music Meister also had a purpose that tied together The Flash and Supergirl. Bravo! And it was great seeing Kid Flash, Vibe and Martian Manhunter working together for the first time. If you don’t remember, Wally West was a little traumatized by his time in the speed force, and he put Kid Flash away. But to combat Music Meister, Wally dons the red and yellow suit again, regaining his confidence. Thanks Music Meister; now we don’t have to deal with long and drawn-out ‘Wally-angst’ episodes. And Barry and Iris are back together after their nonsense breakup last week. Hallelujah! And Mon-el and Kara are a couple again. Not that I care all that much, because their relationship felt rushed. But it is what it is.

The music/singing was so good I wanted more of it. Grant Gustin and Melissa Benoist, the actors playing Barry and Kara, came from the singing show Glee. So you know they have the pipes and jazz-hands to get the job done. And they sing a cute original song called ‘Super Friends,’ that really showcases what they can do. But they aren’t the only ones singing; Stage legends Jesse L. Martin, Victor Garber and John Barrowman, dazzle us as singing versions of their Joe West, Martin Stein, and Malcolm Merlin personas. But since the musical takes place in Barry and Kara’s head, people aren’t always who they appear to be. And rounding out this musical dream team are Carlos Valdes and Jeremy Jordan, Cisco and Winn, who also have musical mojo. There are duets, hence the title of the show, along with solos and a big Broadway-style song and dance number. And in the end, Barry proposes to Iris again, in the real world, singing the moving original song ‘Runnin Home to You.’ It was a teardrop moment.

The plot was simple, as plots to musicals usually are. The Music Meister whammies Supergirl and Flash, leaving them comatose. But things aren’t always as they appear. Barry and Kara are trapped in a shared dream, that’s an old-timey musical. And they have to follow along with the story to find a way out, and back to the real world. But things get awkward when they discover that the story centers on versions of Iris and Mon-el, who are deeply in love with each other. But the couple comes from two feuding crime families, so their love is forbidden. It’s a gangster version of Romeo and Juliet. Barry has to help Iris convince her two Dads, Joe West and Martin Stein, to accept her new love. And in doing so, Barry realizes his mistakes with the real Iris. And Kara has to help Mon-el convince his Dad, Malcolm Merlin, to accept his new love. And in doing so Kara realize she’s being too hard on the real Mon-el.

The story ends when Cisco vibes the real Iris and Mon-el into the dream world, just as both Barry and Kara are shot. They don’t have their powers. And as Kara and Barry are about to die, both couples confess their love for each other, and are brought out of the dream by true love’s kiss. It’s corny I know, but it’s a musical so it worked. As it turns out, the Music Meister isn’t really a super villain. He’s an omnipotent being with a little too much time on his hands. So his mission all along wasn’t mayhem, it was correcting romantic wrongs, and having a bit of fun. And now that the couples have reunited, he vanishes. Maybe he was a version of Cupid. Then Kara, Mon-el, and Hank head back to their Earth. And Barry surprises Iris with a singing proposal. THE END.

LAST WORDS: There was a nice Arrow Easter Egg in the episode. Mon-el’s name in the dream world was Tommy. And on Arrow, Malcolm Merlin’s son was named Tommy… And it looked like they tweaked Kid Flash’s suit. It fit better. I guess the old one was destroyed so Cisco had to make another one. Good job Cisco. And speaking of suits, when does Mon-el get one?