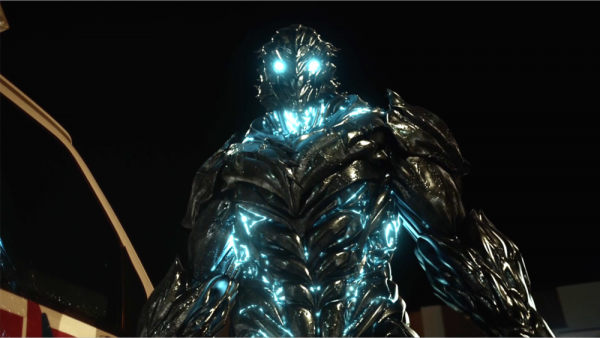 All the time travel paradoxes in The Flash are beginning to give me a headache. Which came first, the chicken or the egg? But before you answer, add alternate realities and parallel Earths into the equation… I’ll jump right to the big reveal. Savitar is a scarred and very disgruntled Barry Allen, from the future. And he took a trip to the dark-side because of the absence of love. At least that is what our Barry figures out that helps him unmask Savitar. But wait a minute! If Savitar doesn’t kill Iris, then there is no evil loveless Barry, or Savitar for that matter. So how can Savitar come back from the future and kill Iris, if there is no Savitar? It’s the whole chicken and the egg scenario: Before Iris’ death there is no Savitar. So if there is no Savitar, how can future Savitar kill Iris, and thereby create himself? And why would he even want to? Even Doctor Who would be confused, and he’s a Time Lord. But I’m betting Flashpoint has a lot to do with this. And I just hope Berlanti and his create crew can clear things up by the season finale. Because I am so confused right now.

So here’s what happened: Caitlin became Killer Frost, and now she’s somewhere out there on the loose. In the future, Barry discovered that Killer Frost and Savitar will team up. So Team Flash has to stop that from happening. And they have to find a way to capture Killer Frost and convert her back to Caitlin. They also have to find Doctor Tracy Brand, a scientist that may have the answer to trapping Savitar in the speed force. So the team has a lot going on. So why then does Wally West, aka Kid Flash, run off to spend some quality time with his girlfriend on Earth-3? With everything that was going down, Kid Flash was sorely missed. But the fight between Killer Frost and The Flash was pretty epic. She was zipping through town on her own ice wave, just like that hero Iceman does from the X-Men franchise.

But this episode was all about love. Joe’s lady tells him that she loves him, and then Joe freaks, breaking up with her. But when Killer Frost kidnaps her, Joe has to admit that he broke up with her to keep her safe. Which didn’t seem to work out. So he confesses that he loves her too, telling her everything. And when the team finds Tracy Brand, who is not yet a doctor/scientist, H.R. Wells starts crushing on her. She becomes a scientist in the future, but Team Flash is hoping that she has the smarts to help them out now. But Savitar and Killer Frost are also after Brand. They want to kill her before her future self figures out how to stop Savitar. It’s kind of a Terminator thing. Also, Cisco loves his best friend Caitlin. So much so that he hesitates, afraid that his vibe blasts might hurt Killer Frost. And his hesitation almost gets Barry killed. (But Savitar doesn’t want Barry killed, because that would be like killing himself.)

And how does it end? Vibe overcomes his trepidation and blasts Killer Frost before she can kill Tracy Brand. Julian takes a sample of her blood, hoping to synthesize a cure. But before they can take the unconscious Frost back to Star Labs, Savitar races in and spirits her away. Darn! But at least Killer Frost still hasn’t killed anyone, which is something Caitlin Snow would never recover from. Wally West returns from his ill-timed vacation, hopefully refreshed and ready for next week’s episode. And Barry realizes that Savitar knows too much, meaning that he must have lived through all of this firsthand, as part of the team.   And it has to be someone devoid of love, who’s willing to use love against them. And that person is the scarred and disgruntled version of Barry himself. Savitar is a future iteration of Barry Allen. So Stay Tuned!!!!

Last Words: Cecile and Joe West professed their love to each other, so is that her kiss of death? Happy Endings don’t usually work out so well on CW Shows… And speaking of Earth-3, are they ever going to free Jay Garrick from the speed force? And what about Captain Singh? Will we ever see him again? And did he ever get married? And if he did, why weren’t we invited? Peace Out!