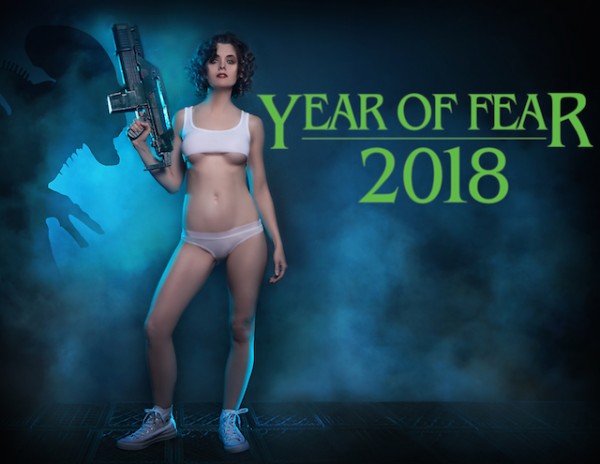 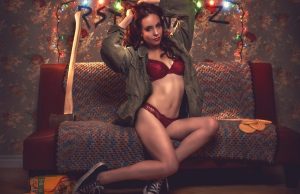 2018 is just around the corner. If you need a calendar for next year, Year of Fear has two options for you. In one, hunky men cosplay as horror monsters. In the other, women cosplay as final girls, killers like Annie Wilkes or just plain iconic characters like Joyce Byers (Winona Ryder) from Stranger Things.

Photographer and Year of Fear creator Ama Lea is local to me in Los Angeles. So I spoke with her about her photography career that led to the Year of Fear, now in its second year. See some of the images from both calendars below and pre-order at www.shopamalea.com for $20 each or $27 for the variant cover.

Q: What is your background in photography? 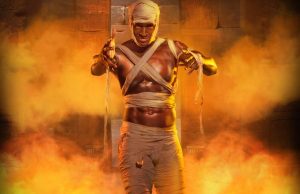 AL: I started shooting when I was super young, like 17. I went to college for that in Boston at New England School of Photography and then I went to grad school at Brooks Institute in Santa Barbara, California. I got an MFA in photography and then I started shooting in the pinup and alternative world doing a lot of tattoo magazines and things like that. I always loved horror and I started doing it for fun. Then I got hired by Fangoria and I’ve just been in horror ever since in one way or another. 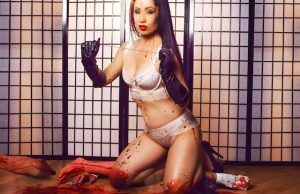 Q: When did the movie recreations start?

AL: I started doing those for a project on my own. It was always kind of a mashup or inspired by, because I tried to do an art book which is now defunct called The Bloody Best. That’s how I started shooting a lot of horror celebrities and legends on my own just for artistic purposes. That was 10 years ago.

Q: My favorite photo recreation you ever did was for Poltergeist with Emma Julia Jacobs as Carol Anne. How did that one come about?

AL: Oh, that was actually for Delirium. Even before I did this calendar, my job at Fangoria was to shoot sexy photos for every issue, for Gorezone. So I was always having to come up with hot versions of movies.

Q: Where do you find your models for Year of Fear? 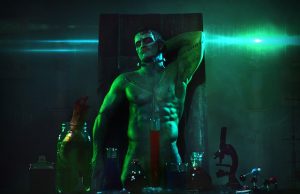 AL: A lot of people I use are already actors in the horror community. I always try to find people who are as excited and enthusiastic about the project as I am, instead of somebody who’s just like, “Oh sure, I’ll wear this mask, whatever.” It’s all people who are super excited about it.

Q: Do you ever have to direct them?

AL: I think for the most part, everybody’s familiar with the movies they’re doing. I don’t think I’ve actually had a shoot where I’ve had to be like, “Have you seen this before?” and they’re like, “No.” This year, during the makeup, we did The Loved Ones which is one of my favorite more modern movies in the girls calendar. We watched the movie while she was getting her makeup done so it was very fresh for her. She could channel that. 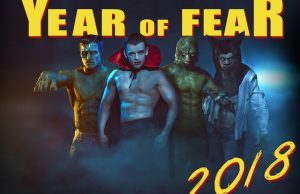 Q: Have the preorders been even between the men and women’s Year of Fear calendar?

AL: Oh, definitely. I’d say the men’s is a little bit better because that’s what we’re known for right now but they’re both doing pretty much the same. The guys, we did a variant cover limited to a couple hundred so that kind of made things a little more even because you’re selling a lot of those at the same time. For a collector’s item, people are buying both.

Q: You have returning customers for the mens Year of Fear.

AL: We have a pretty good following for that just from doing it last year. We pretty much toured with it so we had a lot of visibility with it. It’s funny because a lot of people I know that work and have been in the horror community forever have just been like, “Oh, you shouldn’t do men. You should definitely do women. Men isn’t going to sell. There’s not enough women to buy it.” You know what? I feel like we destroyed that myth. There’s plenty of women and LGBT people in the horror community that fully embrace it. 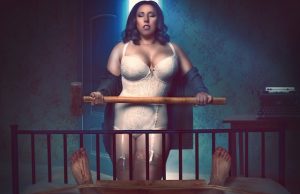 Q: Will you be doing more signing events when the 2018 Year of Fear calendars come out?

AL: Yes, the biggest ones we have right now, we have our release party that will have calendars on hand at the Mystic Museum on November 4th. Then we’ll be doing a giant signing at Dark Delicacies on December 2 with all the models from both calendars, all the makeup artists and everybody that worked on it is going to be there for that.

Q: What do you think makes people want these horror images year round, not just at Halloween?

AL: Obviously, horror has a huge following in general. Horror fans are the most enthusiastic people I know. I think a lot of it is it’s just funny. It’s just kind of a silly think. Having all of August getting to look at a naked Leatherface makes me smile every day.

Q: Anything else you want me to include about Year of Fear? 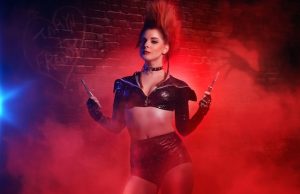 AL: My big thing about doing the female calendar is there are so many exploitive calendars out there for women. That’s why I started doing this to begin with, shoot guys to reverse that role. With shooting the girls calendar, my big thing was if I’m going to do this, it has to be strong. I’m not going to do girls dressed as guy characters, no victims, no girls that are half dead or getting carried by monsters. I’m only going to do these strong fully realized female characters that exist in horror. That was the one thing. If I’m going to do this, this is how I’m doing it.

Q: As a photographer, how do you create empowering images? 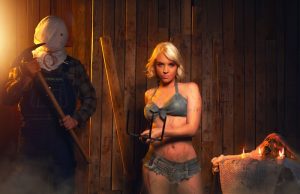 AL: For me, I’ve always looked at it like this and also as somebody who’s modeled nude for over a decade. If it makes you feel good, if it makes you feel strong, if you are there on your own accord and feel great about the work that you’ve done at the end of the day, then that’s great. That’s fine. Be there, do that. As long as you’re not getting bullied into it, as long as there’s no man behind the camera being like, “Why don’t you drop that strap lower.” So I never pressure anyone into anything and even directing, when I do any sort of sex scene or nude scene, I have long discussions with the women I work with beforehand of what they are comfortable with and how they want to be perceived and how they see that character, and what their actions mean to us.