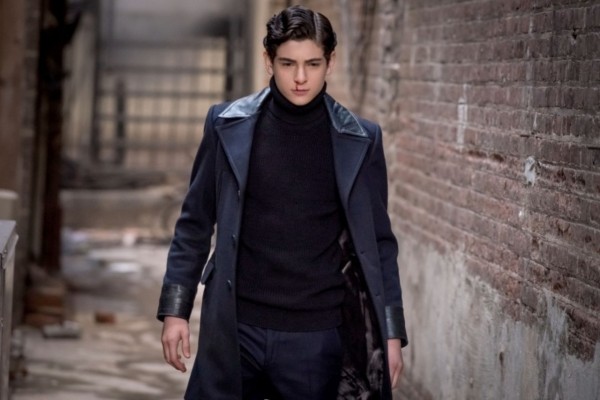 They warned us that something life-changing was going to happen to Bruce Wayne, and they weren’t kidding. I gasped in horror as they rocked his world, and ours too.   I’ve always said that this young Bruce Wayne does whatever he wants, damn the consequences. And tonight he proved me right..

Remember the ceremonial knife Bruce bought at auction? Well he takes it to the museum to have the curator, a kindly grandfather, translate the markings on the knife. That’s where we meet Alex, the curator’s young grandson, who also takes an interest in the knife. Alex is a little younger than Bruce. Well, when the curator asks if they can keep the knife over night to study it, Alfred balks at the idea, knowing how dangerous that would be. But Bruce lets them hang on to the knife, with no mention of R’as al Ghul, the dangerous madman that might come looking for it.

Needless to say, in the middle of the night, a stranger comes knocking. And the old curator, sensing that something’s wrong, gives the knife to Alex, and tells him to hide. Then R’as shows up looking for the knife. And when the kindly old man denies having it, R’as snaps his neck, killing him. It’s a sight that totally terrifies Alex, who runs off.

The next day, Jim Gordon arrives on the crime scene, just as Bruce shows up to get the knife back. Then the pair figure out where Alex might be hiding, and Jim goes after him, warning Bruce to back off. But Bruce tags along unseen anyway. And when they find Alex, they soon realize that they aren’t the only ones looking for him. R’as sent his human bloodhound to track down the boy. And during the scuffle, Bruce and Alex escape and go to retrieve the knife.

Alex is terrified by what’s happening, and by what’s happened to his beloved grandfather. He even asks Bruce if he knew that giving them the knife was dangerous, a fact that Bruce does not own up to. And when they retrieve the knife, running into R’as and Jim Gordon, Alex’s life is put in danger. Bruce has the ceremonial knife, and R’as has a very sharp blade against Alex’s throat. Of course Alex is scared. But R’as promises to release him unharmed if Bruce gives him the knife.

Jim Gordon tells Bruce to slowly hand the ceremonial knife over to R’as, to save Alex’s life, but Bruce refuses. Which totally shocks Jim. Alex is about to be killed. But despite Jim’s pleas for Bruce to surrender the knife, Bruce refuses. That’s when R’as al Ghul cuts the boy’s throat, killing him… WOW! But at least Ra’s never got the knife, he’s just going to jail for murder instead.

Back at the station, Bruce breaks down, finally realizing what he’s done. The weight of the grandfather and grandson’s death rests solely on his shoulders. And though Jim tries to shift the blame to R’as, Bruce is well aware that they both died because of him. In tears, he takes the blame, proclaiming that he’s the real murderer.  It’s a chilling end to Bruce’s childhood….

Elsewhere in Gotham; The Penguin catches The Riddler. Which isn’t too hard, since Ed Nygma has lost his smarts. But instead of killing him, or putting him back on ice, The Penguin lets him go. Oswald thinks it will be crueler to let Ed live with the knowledge that he’ll never be the man he was. So Penguin just walks away, leaving Ed sad an confused.   And don’t forget about Lady Falcone, she’s still in Gotham, though her motives are unclear. Is she there to dethrone The Penguin? Or is she just there to have sex with Jim? And what will Lee say, if and when she returns? STAY TUNED!!!

LAST WORDS: In the preview trailer we get a glimpse of Solomon Grundy, the pale powerhouse… “Solomon Grundy, Born on a Monday, Christened on Tuesday, Married on Wednesday. Died on Saturday, buried on Sunday. That was the end of Solomon Grundy”…  But is he man or monster?  You never know what’s about to happen in Gotham.