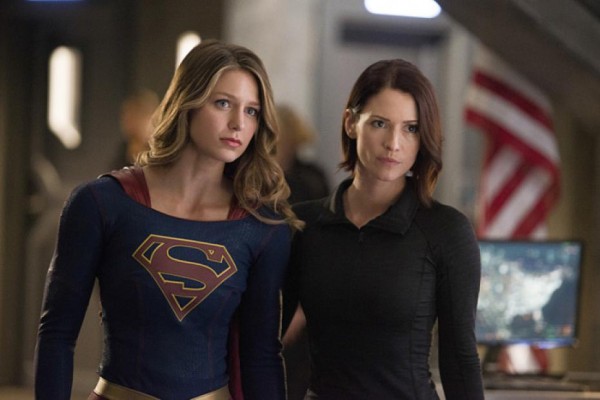 First things first: Maggie and Alex are heading to splits-ville. The handwriting has been on the wall for a few episodes now. Alex wants to be a Mom someday, but Maggie says no-way kids. And last week Maggie pretty much laid down the law, telling Alex it’s her way or the highway. And though at first Alex knuckles under, this week it becomes clear that ultimatums have no place in a marriage. So tearfully, Alex tells Kara that the relationship has pretty much hit a wall. And Maggie is on one side and Alex is on the other. So the marriage is off, at least for now. This may be the end, or just a big bump in a longer road.

But the question of the day is: – Should someone with God-like powers be worshipped?   A cult has developed in National City that worships the Kryptonian God Rao, who’s representative on Earth is supposedly Supergirl. Making her kind of like Jesus. (The same comparison is often made about Superman) And though Supergirl doesn’t like the idea of the cult, Freedom Of Religion keeps this from being a crime. It may be an annoyance, but you can’t arrest anybody for being annoying.

Unless this cult takes their religious beliefs a step too far, and they do. I guess to be a True-Believer, you have to have been actually saved by Supergirl. And so, some prospective members stage actual disasters, so that Supergirl can swoop in and save them. And arson and the like are actual prosecutable crimes. The Cult Leader, who is obsessed with Supergirl, was on the crashing plane that Supergirl rescued in the very first episode of the series. The event that prompted her to become The Girl Of Steel. And he saw her, sans costume, triumphantly fly off after the epic save.

LESSON ONE: When someone has seen you, sans uniform, being super. AND that person is so obsessed with you that they form a religion around you. Don’t just show up as Kara and act all ‘situation normal.’ The Cult Leader recognized her instantly, secret identity blown. And then the guy, who somehow has Kryptonian technology, tries to use it to blow up a stadium full of people. I guess he wants Supergirl to save them so they’ll possibly become converts too.  Which is a good plan, if you’re crazy.

POINT OF ORDER: Kara saved National City from an alien invasion just a few months ago, so she’s theoretically already saved everyone in National City at least once. So why does she have to save people again to prove his point? Can’t this High Priest of Rao just reference that event to spread his message? How many miracles does his religion require?! Needless to say, Supergirl saves the day and puts the guy in jail. And he’s so devoted to her he won’t reveal her secret identity. Whew! Bullet dodged!

THANK RAO: The incident triggers a spiritual awakening in Kara. When she was growing up back on Krypton, her family were believers of Rao, a God who teaches Love and positive virtues, not destruction. So we see Kara back at the DEO, listening to the hologram of her Mom talk about Rao. But the destruction of the Kryptonian artifact back at the stadium triggered something too. There’s a space ship, possibly Kryptonian, at the bottom of the ocean. And it powers up, reviving someone unseen, a possible new villain perhaps. STAY TUNED!!!!

LAST WORDS: I really miss Cat Grant’s energy. She was the rudder that kept this show interesting, and on course. Without her, the show just seems to meander along without much meaning.

And Lena Luthor isn’t a great replacement. Most of the time I wonder why she’s even there. And now that she and Kara are best friends, the elephant in the room is so obvious that the fact that no one mentions it makes the show feel ridiculous. Lena’s Mom runs the evil Cadmus organization that’s holding Jeremiah Danvers prisoner, Kara’s adopted Dad. And nobody tries to find him, or seems to care. But you matter to me Dean Cain. I haven’t forgotten you…

And I love how in Alex’s emotional speech about how she’d like to be a Mom, and what she’d like to teach and do with her daughter, she never address the possibility of having a son. All kids matter Alex, be they son or daughter.