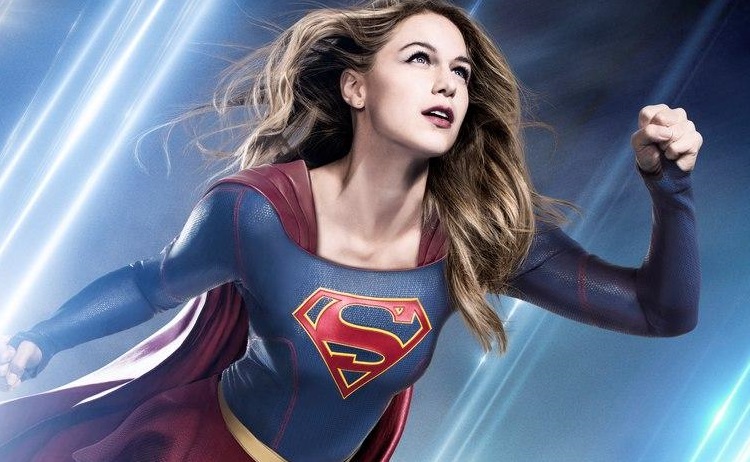 The thing about cliffhangers, midseason or otherwise, is that the next episode is all about the resolve. So here’s what happened – As you recall; Supergirl pretty much got the snot beat out of her be Reign, the new bad girl in town. So now she’s stuck in a coma. Luckily for Supergirl, there’s a purple guy in a white fright wig that’s visiting from the future. And he’s got the smarts to enter her subconscious and help her get over the monumental beat-down she just received.  Supergirl wakes up just in the knick of time,  the bad-girl is defeated, and the cliffhanger is resolved.  YEA!!!!!!!!!!

The guy’s name is Brainiac 5, and he’s half computer, so his friends just call him Brainy. He’s part of the Legion Of Superheroes, Mon-el’s posse from the future. Brainy is a character from DC Comics, and he’s supposed to be green with blonde hair, so his look here doesn’t make a whole lot of sense. But he helps Supergirl heal, from her mental scars, and get back in the fight. Though during that talky mental journey, another character from the comics makes an appearance. It’s Streaky! Supergirl’s pet cat, that had sporadic super powers in the comics. But this version is just cute and cuddly, and non-super. And instead of being an orange cat, like it’s comic counterpart, Streaky is a black cat. Continuity-wise they’re just not trying that hard this season.

Streaky is black, the Legionnaires are all wearing black, Reign’s bad-girl suit is black. Do you see a bland pattern here? I guess color is the real enemy this season. Anyway, Reign is going around killing anyone who commits a crime. So she sees herself as the true hero this world needs, serving as judge, jury and executioner. But murder is a crime too, so our good guys have to stop her.   Thus they battle Reign, and with Supergirl’s help in the last act, the good guys win. Driving Reign off to regroup and reevaluate.

So it’s kind of a win, but kind of not, because Reign will return at some point. But for now, everything’s right with the world. James and Lena are kissing now. That’s new. While Supergirl seems to be coming to grips with the loss of Mon-el. He’s not dead, but he is married to someone else. So ouch! Alex’s leg was broken in the fight, but she’s on the mend. That’s good. And that crazy cult leader that was crushing on Supergirl escaped prison during the skirmish. And now he’s crushing on Reign. Talk about fickle. And what about Reign’s daughter? When’s she going to find out that her Mom has gone over to the dark side? I guess we have to STAY TUNED!!! 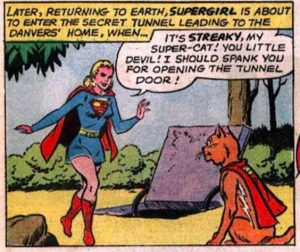 LAST WORDS: According to their comic book origins; Streaky is supposed to be orange with a white lightening bolt birthmark, Saturn Girl wears red and white, Brainiac 5 wears purple, and Mon-el wears red and blue. But here it’s black across the board. So there’s that. And given that Saturn Girl’s power is supposed to be telepathic, she should have been the one in Supergirl’s subconscious. But instead she uses her brainpower to throw gym weights around, when she should have been able to take control of Reign’s brain, ala Professor X, and just shut her down…And Mon-el supposedly has super strength but can’t punch through ice. How lame was that?… Come on producers, can somebody read a comic book for goodness sake!!!