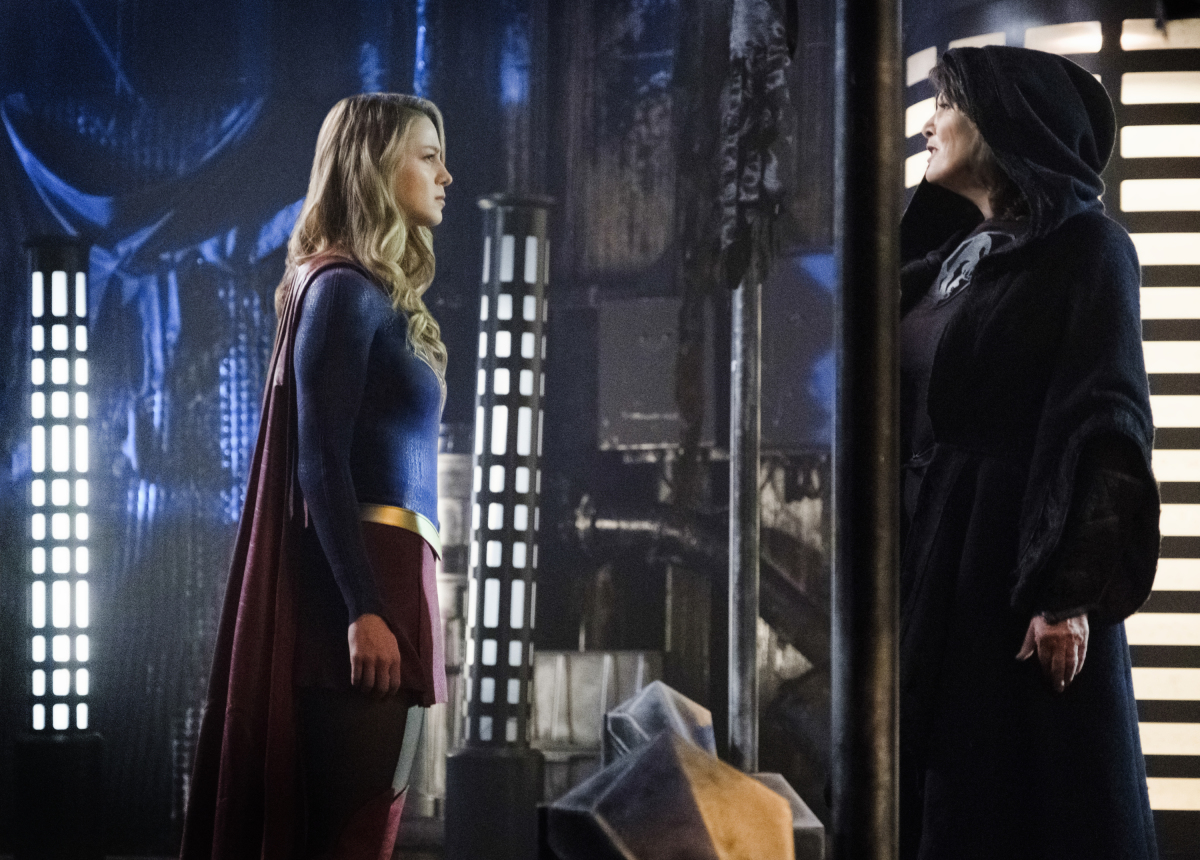 Reign may have been defeated last episode, but she’s still out there somewhere, and Team Supergirl still have no idea what Reign’s deal is. So here’s the plan: Find Fort Rozz, which Supergirl tossed into space a while ago, talk to a wise old Kryptonian priestess, and gather some intel that way. But Rozz is now circling a blue star that emits radiation that kills all men. (Silly, but go with it) So Supergirl has to recruit super bad girls, Live Wire and Psi, to help her out. And oh yeah, since there’s no yellow sun she won’t have super powers.

If you don’t recall, Fort Rozz is the Kryptonian prison ship that landed on earth after it was freed from the phantom zone. That all went down season one. And the priestess in question is being played by Sarah Douglas. Which is really way cool. Douglas played Ursa, the Kryptonian badass in Superman The Move and Superman II.

Alex’s leg is broken, so she had to sit out this trip and babysit Ruby.   Supergil’s galactic posse consists of; Saturn Girl, Psi, and Live Wire. Both Live Wire and Psi are super villains that Supergirl defeated, so things are awkward. But the enemy of my enemy is my friend. They both know that Reign is a deadly threat, because she kills criminals, so they agree to help defeat her to save their own skins.

They take the legion ship to Fort Rozz, and things go wrong from the start. Everyone aboard hates Supergirl, since her Mom built Fort Rozz in the first place. And Supergirl is, after all, walking around with her family crest on her chest. Maybe wearing D.E.O. overalls would have been a smarter choice for the mission. Wearing a red skirt and cape, with a big ‘S’ on her chest, kind of makes it hard to walk around unnoticed. She doesn’t blend.

Supergirl finds the priestess and they talk a bit, but Reign shows up to shut things down, and she does just that. She kills the priestess, to keep her quiet, and she almost kills Supergirl too. But when Reign goes to fry the Girl of Steel, Live Wire jumps in front of her, taking the brunt of the blast, and she dies in Supergirl’s arms.  Like Darth Vader, when push came to shove, there was some good in her after all.

Psi uses her power to chase off Reign, and the survivors return to Earth. But the trip wasn’t a complete waste of time. They learned from the priestess that Reign is supposed to have own posse, two super powered world killers named Purity and Pestilence. So the good guys have to find these world killers before Reign does, or it’s bad news for planet Earth. STAY TUNED!!!!!

LAST WORDS: Braniac 5 is an arrogant jerk. He’s so busy looking down on everyone and everything around him, he doesn’t even save the day, Winn does… Alex does a great job-babysitting Ruby. She uses her smarts to stop a cyber-bullying situation. I mean, she scares that mean girl straight… And Mon-el proves he’s a great listener, and a lot more mature now that he’s been living in the future for seven years.  You go Mon-el!!!