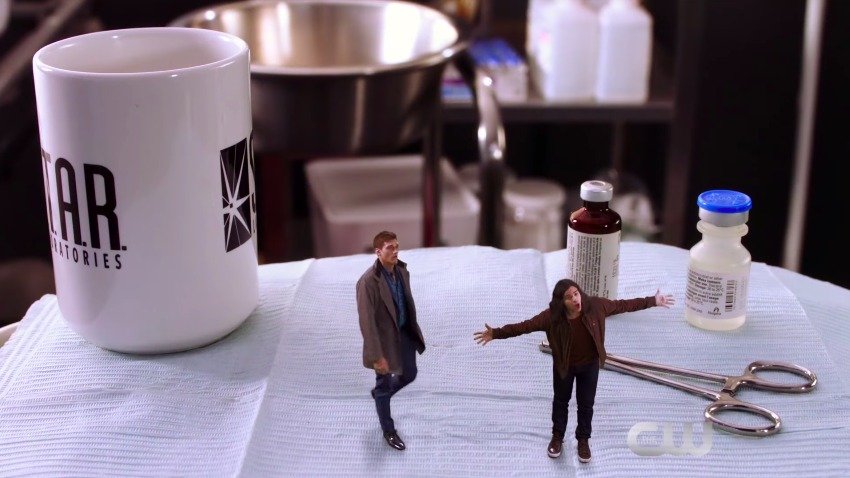 The Flash is one of my favorite shows, even when the episode feels like more of a throwaway than anything else. There’s no sign of the new young and hunkier Clifford DeVoe, or his Larcenous Lady Love. And Team Flash puts aside their efforts to spring Barry from Prison, and go to work to prove that Barry’s new prison pal is innocent. – Which of course he is. – And the guy, who actually committed the crime he’s charged with, turns out to be a meta-human from the Bus incident named Dwarf-Star. And he can shrink things, including people. Coincidence? Not if you know The Thinker.

Honey I Shrunk The Heroes: Vibe and The Elongated man try to stop Dwarf-Star and end up three inches tall.   But the situation doesn’t get as fun as it could have been, probably due to budget restraints. Though when Iris accidentally steps on Ralph and then has to scrape him off her shoe like a piece of gum, that made me smile. And they live in a Lego city. That was cool. But then, when Harry tries to embiggen Ralph and Cisco, he just makes things worse. As they are now set to explode if their condition isn’t reversed by the Dwarf-Star in a few hours. Oopsie!

And oh yeah, Joe’s pregnant girlfriend Cecille has super powers now. I know what you’re thing, and yes that’s kind of random. She can read minds now and nobody really knows why. I just hope this weird new subplot actually goes somewhere. Maybe it has something to do with her unborn baby, which is a girl. Caitlin found that out and then Cecille read her mind. Could the adult version of that kid be the weird girl that keeps popping up? The one with the unspoken connection to Barry and Team Flash. She first appeared at Barry and Iris’ wedding, and then again in this episode.

Cisco and Ralph do not blow up! Surprise, Surprise! Harry tricks Dwarf-Star into turning his powers on him, while Cisco and Ralph are hiding in Harry’s breast pocket. So Harry does not shrink, but Ralph and Cisco do get embiggened, returning to normal size. Then Team Flash captures Dwarf-Star and tries to get him to confess, so that Barry’s friend will walk free. But the dude refuses, leaving Barry’s friend to rot in jail.  Bummer!

BUT, being The Flash’s friend does come with perks. Barry uses his powers to spring his friend and super speeds him to China, faster than what should be possible. It’s that kind of episode. And oh yeah, isn’t breaking someone out of prison illegal? I guess superheroes are above the law nowadays. But Barry doesn’t get away with his obvious Indiscretion: The wicked Warden caught Barry, on camera, using super speed. So now he knows Barry’s The Flash. But then the warden, who’s obviously corrupt, drugs and kidnaps Barry, intent on selling him to Roulette. So Stay Tuned!!!

LAST WORDS: So why are superheroes forsaking the law these days? Barry, pulling a prison break, felt wrong and lazy, as well as absurd. Since when can Barry run from Central City to China and back again in less than 30 seconds? Plus he’s carrying a man that weighs twice what he does, and that’s a conservative estimate. And he leaves the guy in China with no cash or passport, no I.D., and he’s a fugitive. Why not let Cecille use her new power to discover something that links Dwarf-Star to the crime and exonerates Barry’s buddy? And while using telepathy is probably a bit unethical, at least it’s not illegal. Come on writers, they’re paying you for this, put on your thinking caps!