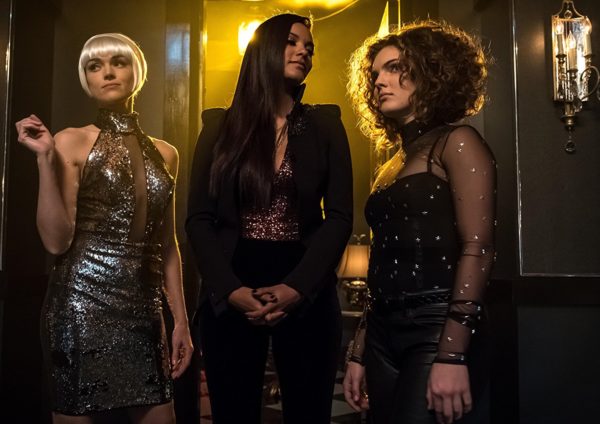 Is the third time the charm? I hope it is, when it comes to poor little Ivy. First she was twelve, then they aged her up to twenty-something and make her sexy. Which was kind of icky, since she still acted like a little kid. And now they changed her into an entirely new adult, by the magic of re-casting. And she is literally Poison Ivy, because if she scratches you, weeds grow inside you and you die. So she’s hot, but less sexy-vamp and more deadly-deva. But does it work? Not really. It’s kind of ridiculous. I know it’s Gotham, where anything’s possible. But this feels like trial and error, mostly error.

And while Alfred idolizes Bruce Wayne’s dad, the fact that in the will, Alfred was made Bruce Wayne’s guardian and apparently given no money to handle the task, seems absurd. So Alfred supposedly worked for the kid he was in charge of. So let me get this straight. Bruce gets all pissy and fires Alfred, for trying to keep him from becoming a rich and entitled jackass. And now Alfred has to move into the Narrows. Oh well, at least he makes a friend. But wait, she gets killed by her abusive boyfriend, who frames Alfred for the murder. What’s an English Butler to do?

And while love is in the air, it’s got a bit of a foul stench. When the Toyman tries to blow up Lee, The Doc, she finally runs in to Jim Gordon. He tells goth-Lee how beautiful she is and whines about her being in town and not calling him. I guess he’s over the fact that he shot and killed Lee’s husband and wants to hug it out. But Lee is still holding on to that grudge. Grundy, who finally remembers that he’s Butch, saved Lee. But when he professes his love for Tabitha, she’s a bit standoff-ish. Butch is, after all, a swamp creature now. The girl’s got standards. And Ed is crushing hard on Lee, which is why his other personality hired the Toyman to kill her. Ed’s got a split personality. Sometime he’s loyal puppy dog Ed, and sometimes he’s the ruthless Riddler. And the Riddler wants Lee dead.

And romance may be dead, but what about Bro-mance? Do Harvey and Jim resolve and reconnect? I’m afraid not. Jim searches for Harvey in a brothel, but he’s actually running a bar now. Jim finds him there, confesses that he misses him, and offers him his badge back. But Harvey understandably shoots him down. Jim did steal Harvey’s job as Captain by sleeping with Falcone’s daughter. A betrayal Harvey won’t soon forget. And offering Harvey a detective’s badge while keeping the job as Captain, is less an apology and more a slap in the face. So in this episode Jim doesn’t get his old girlfriend back, or his old boyfriend.

And speaking of girlfriends; Selina, Barbara and Tabitha reopen Penguin’s club, making it Gotham’s new hot spot. Bruce Wayne is there drinking with his underage crew, and makes a very unconvincing bad boy. The new Ivy is there doing her thing, whatever that is. And somehow Selina recognizes her, even though she’s a completely different person. Selina follows Ivy back to the pad she squatting in and they powwow. Selina used to take of Ivy, when she was a kid. A now Ivy wants to take care of Selina, returning the favor. Promising that together they can make Gotham their bitch. –Ivy’s words. So Stay tuned!!!

LAST WORDS: They Toyman was an interesting character, but they killed him off so quickly it felt like a waste.  And Alfred’s not on the hook for his friend’s murder.  He found they killer boyfriend in Harvey’s bar and turned him in.  Next week we see Jerome, and he’s always interesting.  They say he’s not the Joker, but that he inspires the Joker.  So we’ll just have to wait and see.  I guess Penguin and Jerome clash in Arkham, so Im in for that.  But I think they need to cut their losses and let the whole Ivy thing die on the vine.  What do you think?