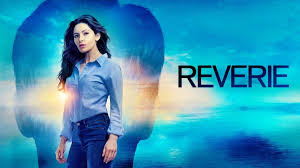 They showed the pilot for the new NBC show REVERIE at WonderCon.  And while it pulled on heartstrings, it definitely felt like Hallmark’s version of the movie INCEPTION. And who needs that…

A big corporation has developed the tech to basically reprogram your dreams.  It creates for you your own Virtual Reality world, called the Reverie, where almost anything can happen.  You can be who you want to be and do what you want to do, and even communicate with realistic VR versions of dead relatives or friends.  The only problem is that the Reverie is so realistic, some people don’t want to leave it.  So while their minds are frolicking in this virtual reality situation, their bodies are comatose and dying.  That’s not what the company wants.  So it hires Sarah Shahi’s character, a noted hostage negotiator, to enter a person’s dream world and talk them into coming back to the real world, before they die.

And while the pilot was entertaining, it didn’t really present anything intriguing enough to lure me back week after week.  It was all talk.

Though, in the show’s defense, the company that invented Reverie seems to be have secrets and hidden agendas.  And Shahi’s character is dealing with a darkness that may be manifesting in the Reverie.  The hotshot negotiator failed to save her sister and niece when her brother-in-law mentally went off the rails and killed his family.  She was there when it all went down, trying to talk him into surrendering the gun.  But the police arrived to soon and he shot his wife and daughter.  A traumatic event that our hero can’t seem to put behind her.  And now that she’s working within the Reverie, she’s either beginning to hallucinate, or the Reverie is attempting to recreate her dead niece/sister in the virtual world.

So, while the show will be about rescuing people from the Reverie, there will be other things going on as well.  But will it be enough to keep you engaged week after week?  Check out a few episodes and judge for yourself.