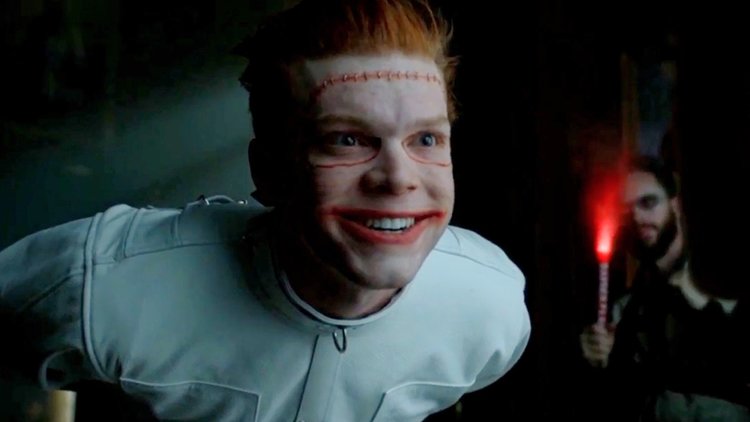 The Mad Hatter and Scarecrow spring jovial Jerome from Arkham. So you know things are going to get crazy. But wait, we don’t get to see Jerome’s big plan at all because it’s a bait and switch episode. Because once they hit Gotham, Jerome disappears and this becomes the Mad Hatter’s party. And using the radio, he hypnotizes about a quarter of the population. They all go up to their roof tops, stand on the edge, and prepare to step off into oblivion, at midnight. Giving Jim Gordon only a few hours to prevent the mass tragedy from happening.

I’ve said it before and I’ll say it again; I don’t understand why people still live in Gotham. Now that can’t even listen to the radio without getting mind-controlled. And Arkham Asylum must be the worse run mental facility ever. The inmates are literally running the asylum. Guards get killed left and right. And the only doctor who ever got anything done there, was the guy turning the inmates in mutated monsters. So how does a place like that continue to get federal funding????

It feels like the writers aren’t even trying this time around. The Mad Hatter used to hypnotize people face to face, using an object, like a pocket watch or something. Now he can just tell people what to do over the radio. Where did he get that power? And when the clock strikes twelve and everyone is supposed to step off their prospective ledges, Jim has no clue what to do. So he randomly broadcast “Help Each Other” and that snaps everyone out of his or her trance-like state. He doesn’t figure anything out. He just says the first thing that comes to mind, and that works.

We also find out that Ra’s Al Guld is still dead. Barbara is having flashbacks or hallucinations, or something. And we see Ra’s tell Barbara that she’s destined to lead the League of Assassins. It’s a factoid that seems pretty ridiculous, and even Barbara doesn’t know why he picked her. But Barbara chooses to just go along with it. Then her hand starts glowing like a beacon, summoning the League to Gotham. And they show up lickety-split.   But the dude assassins don’t dig the new management, so the female assassins kill them all. Then wham, bam, thank you Ma’am, now Barbra has an army of lethal ladies to command.

LAST WORDS: The more they try to make Bruce into a tough guy, the more ridiculous the show becomes. Bruce stops a guy from killing Jerome in a dinner, and then Jerome kills that guy and escapes, leaving Bruce to fight a thug twice his size. And it’s painfully obvious that Bruce only wins because the script says he does. Then Bruce announces that he’s going after Jerome. Which is ironic because if Bruce hadn’t stepped in to play hero, the murderous jokester would be dead already. Alfred, where are you when we need you?