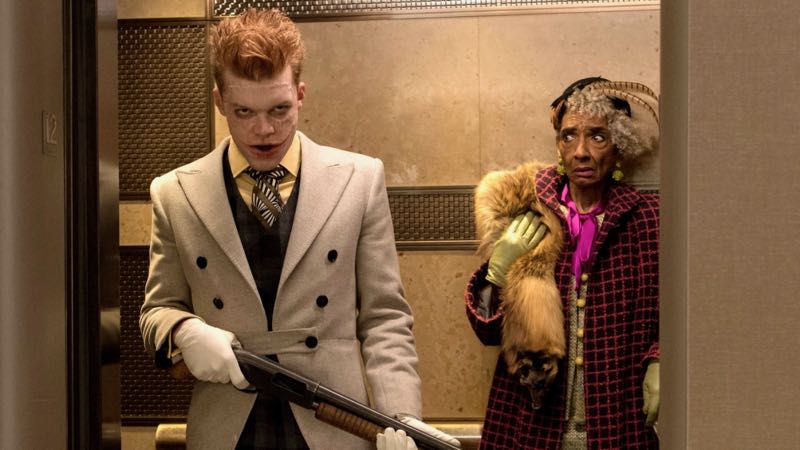 Jerome has an identical twin brother named Jeremiah. So you know what that means? The actor playing Jerome is also playing Jeremiah, the same way they did things when there were two Bruce Waynes. But I think Jerome is the red herring and Jeremiah may be the actual Joker. While Jerome seems crazy enough to be the actual Joker, Jeremiah is a genius and a bit of a head-case too, and you need that combination to be the true crowned prince of crime.

Is introducing The Joker, the producer’s last-ditch effort to save a show that’s floundering? Gotham’s ratings aren’t great, and the show hasn’t been renewed for next season. But that doesn’t mean it won’t be. It’s not dead yet. But it’s definitely on life support. Constantly changing it’s focus, the show’s macabre tone often swings from the cringe-worthy to the cornball. You never know what you’re going to get. And the huge cast is hard to wrangle, giving us subplots that are all over the place. The show is a ship without a rudder, and in the comics, that rudder is Batman.

Unfortunately, the Bruce Wayne in this Gotham started out as an innocent kid, who lacked any real guidance or common sense. And though they made Alfred a tough guy, he was always more servant than surrogate. So Bruce was an undisciplined rich kid who dropped out of school, did whatever he wanted, got people killed, and never did much to acquire the skills necessary to be the worlds greatest detective/crime fighter. And now that the show has figured out that they need a Batman, they’re trying to force the cape on the kid but it doesn’t fit. Seeing teen Bruce Wayne trying to be a savvy badass now, after all he hasn’t done, is borderline ridiculous.

Jim Gordon is no better. He started out as the show’s moral compass. He was the voice of reason in Gotham. But he’s broken so many laws, and done so many questionable things, he’s no better than the criminals he’s still trying to jail. And every time he attempts to take the high road, he’s more hypocrite than hero. And his ladyloves are as bad as he is. Barbra is the head of the all-female version of the League Of Assassins. Sophia killed her own father to become head of the Gotham Underworld. Then she was shot in the head by Lee, who is now the cruel and questionable leader of the Narrows. AND, now Lee’s shagging The Riddler.  Yuk!  Nobody wanted to see that.

LAST WORDS: I hope Gotham gets picked up for one more year. Just to see how everything turns out. Will Butch stop being Grundy and win Tabitha back? Will The Penguin every find love? Who will Ivy turn into next? I think it should either be an older woman, or a dude. Does Selina become a cat burglar and thus develop a cat obsession? Who will Jim sleep with to get his next promotion? And does Jim marry psycho Barbara, evil Lee, or some other woman he’s destined to corrupt? And finally, if Jerome or his bro succeed and turn the citizen’s of Gotham mad, will those not affected FINALLY realize they need to move out of that town? Fingers crossed for a renewal. I’ll let you know when I know.